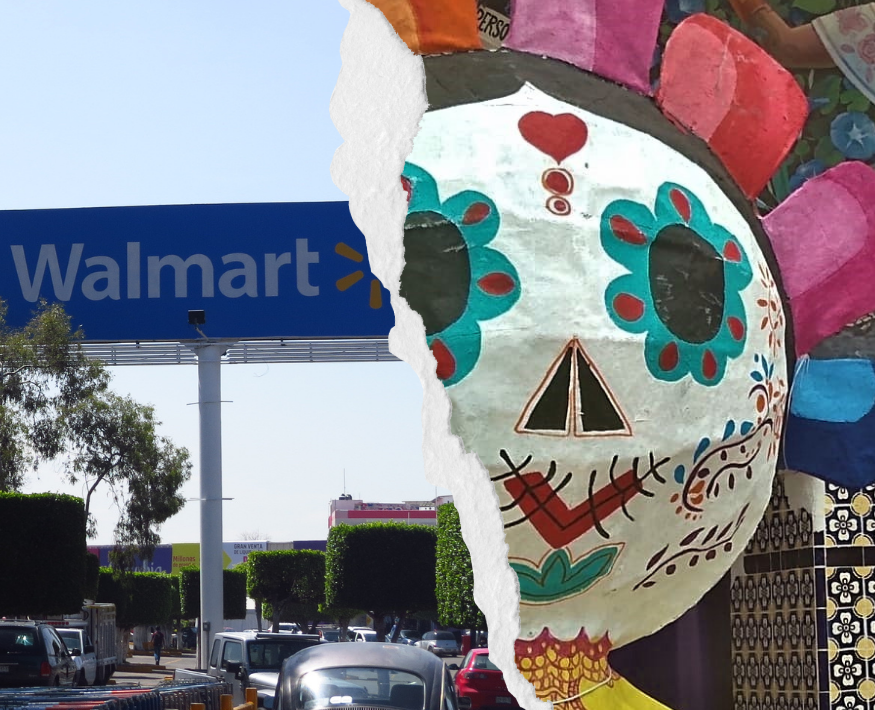 The historic center of the city of Puebla, where I live, is a world heritage to place. The main square is flanked by a cathedral built in 1575 and the nearby post office, like many buildings in the area, is beautifully decorated in traditional tiles.

But among these buildings are McDonald’s, Dominos, Oxxo (a Coca Cola store), Subway and Burger King. A Pizza Hut, KFC and Starbucks are just a block away.

Starbucks has 670 stores in Mexico, Subway has 900 and Walmart has 2,610, the most of any country after the United States and likely to grow given their profits during the pandemic.

The impact of this change in urban landscape and consumption on the identity, way of life and culture of Mexicans should not be underestimated. More and more American transnationals have set up shop in Mexico in recent decades, taking advantage of unfair trade deals, exploitative working conditions and cheap public services.

Local restaurants and markets for traditional Mexican tianguis struggle to compete, and many Mexicans look to American businesses as a source of social status.

“There is no equality of conditions, so it’s not really a competition”, explains Iktiuh Arenas, expert in urban planning and human rights, and specialist of the Mexican Secretariat of Agrarian, Land and Urban Development (SEDATU).

According to Arenas, malls, department stores like Walmart, and transnational restaurant chains have advantages over local markets and artisans because they have big marketing budgets. They encourage people to buy products that have not been produced locally, and they have the money to secure the best locations in the main squares and streets.

In recent decades, he argues, “development” has been limited to building malls and supporting chain stores, while green spaces and museums have been deprioritized. “This urban development policy is based on copying the American model,” he says.

Walmart in Mexico (operating as Wal-Mart de México y Centroamérica) is the country’s largest retailer and understand other brands, such as the smaller supermarkets Bodega Aurrerra, the wholesaler Sam’s Club, MaxiPali and Superama. In 1994 it had only 25 stores in Mexico, but the North American Free Trade Agreement (NAFTA, 1994-2020) supposed he could easily sell hundreds of products imported from the United States tax-free.

Since then, Walmarts have been built in wooded areas and on or near ancient ruins, and threatened buildings of artistic value. There is a Walmart near the Teotihuacán Archaeological Zone and the local resistance managed to prevent one from being built in the indigenous town of Cuetezalan.

With the lifting of tariffs and trade barriers under NAFTA, these companies also enjoy some of the highest rates of exploitation in the world. While a Mexican worker in the United States to win US$1870 on average, in Mexico the figure drops to US$291.

NAFTA has also led to a massive displacement of rural workers in Mexico, and Arenas says public policy has shifted away from rural areas to cities. He argues that “classism and racism towards rural workers” was also a factor.

As more and more farmers settled in the cities, they became the new cheap labor force.

Bertha Meléndez is a long-time activist and well-known musician. She sings in 10 Indigenous languages, researches and compiles Indigenous songs, while collaborating with community radio stations. She says newcomers to the cities then sold the idea of ​​junk food as a way to feel modern.

“It was not just a change of regime, but a change of lifestyle, as people left communities where there were strong neighborly ties and a slower approach, and came to the cities where they were then. so exploited that they had no time to cook their own food,” she says.

While she talks, we eat tortilla soup. “It’s a Mexican dish,” she says. “It takes time to prepare.

“People are abandoning street markets and going to supermarkets because of status… When a family goes to McDonald’s, it’s because they want to look like they’re upper class. People think the food is better there, but it has a lot of chemicals, it can be very addictive and bad for your health,” comments Samaniego.

Many Mexicans feel the need to pretend. This involves pretending that their living conditions are better than the poverty they face, as well as emulating American or European ways and buying products or brands there. For hundreds of years, colonization and imperialism taught people that their culture and way of life were inferior.

Before the Spanish invasion, and long after, people ate seasonally, Arenas notes. “But now Walmart sells products all year round and so it breaks with the old way,” he says.

He explains that producers are vying for the privilege of Walmart’s shelf space and consumers are buying things they don’t need as part of the aspiration to be something better. “It reinforces these issues of classism and loss of identity,” he says.

Before the Spanish invasion, people would gather in the main plazas and central areas, lay down woven petate mats, and then arrange their wares on them. They traded goods or sold them for cocoa or copper tools. These tianguis markets were a key part of people’s culture and way of life, and they continue to to exist in one form or another today in towns like Cuetzalan, Tianguistengo, Otumba, Tenejapa, Chilapa, Zacualpan and more.

“At Walmart, you exchange money with someone, but you don’t exchange knowledge, you don’t have a conversation,” says Samaniego. But in modern and traditional tianguis, you can talk directly to the farmers, or the artists who made the crafts, they told me.

That’s why Meléndez sees companies like Walmart and McDonald’s moving communities, and their food and lifestyle.

“We are the children of corn. Since ancient times, we have depended on maize,” she says. It describes a relationship with the land and the environment which is a key element of people’s identity.

“Aboriginal culture is alive, but it’s not as visible,” she says. Some of the languages ​​she sings in, such as Nahuatl and Mixedco, are widely spoken. But others are almost extinct, spoken by a few hundred people. Colonization and then American economic and cultural imperialism mean that people reject their Indigenous roots and “instead they imitate American culture. Being Indigenous is stigmatized,” she says.

This is why Meléndez considers his songs and indigenous and Mexican art essential to people’s sense of identity and visibility. There are 12 millions professional folk artisans in Mexico. But they have been one of the most negatively impacted by the pandemic. They often live in areas without internet or phone signals and often lack the technical knowledge to promote their products online, relying instead on interactions on the streets and in squares. During last year’s shutdowns, many artists were completely cut off from their income.

Stores like Walmart, on the other hand, have adapted to selling online. Profits for Walmart in Mexico and Central America reached 162 billion pesos in 2020, compared to 148 billion in 2019.

“Mexico is dominated by the United States…culturally, economically, and they even choose our presidents so they can continue to send their companies here and take advantage of cheap labor…and with that comes a politics that causes people to reject their culture, and that means rejecting themselves. Melendez says.

Foreign corporations have a lot of freedom in Mexico, and they’re backed by trade deals like NAFTA and the USMCA that were created in very unequal power dynamics. An activist, Gustavo Esteva, during the 2002 campaign protests against the plans for a McDonald’s in the main square of Oaxaca, succinctly summarizes: “It is nothing less than a cultural conquest.”

Changing the Culture of Learning in the Philippines – Manila Bulletin