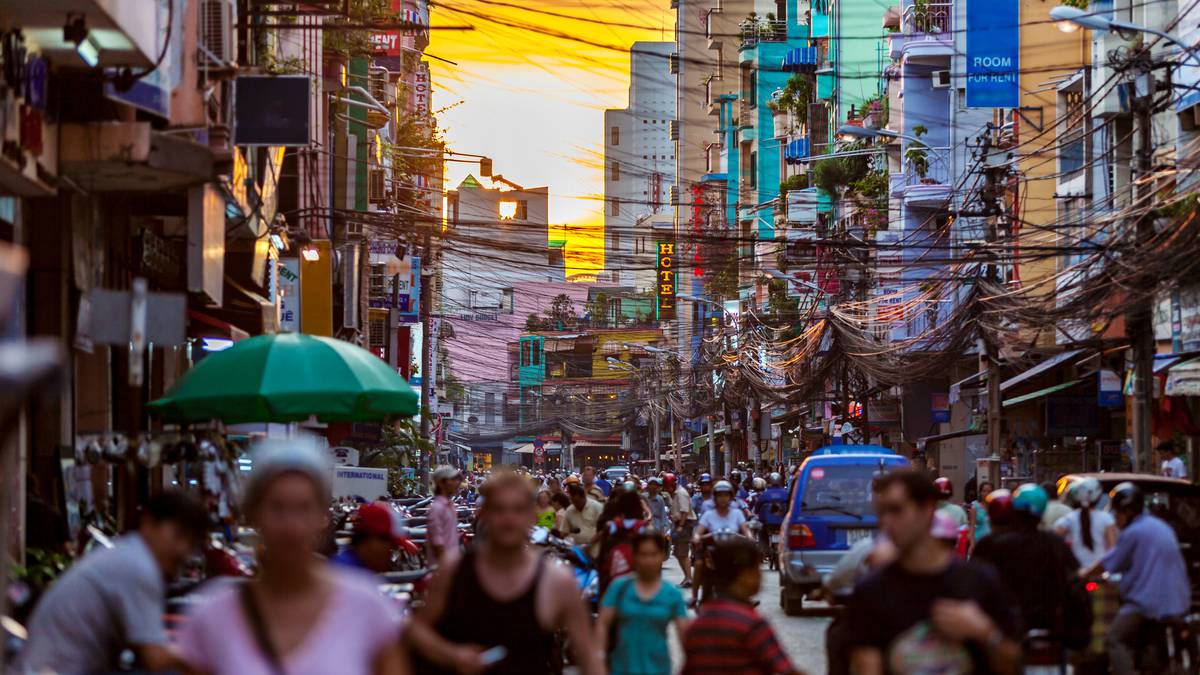 You never get bored in the busy streets of Ho Chi Minh City. Photo / 123rf

Start the day at the Old Compass Cafe, tucked away on bustling Pasteur Street by a maze of stairs. Stock up on Vietnamese coffee and banh mi op la, a hearty local dish that combines a hot baguette with fried eggs and pate. Co-founder Mark Bowyer also runs Rusty Compass, an excellent Vietnam-focused travel website.

11 a.m.
Travel by motorbike taxi 2 km north to the War Remnants Museum. The building’s galleries feature powerful exhibits on the Vietnam War, with anti-war posters from many countries, including New Zealand, alongside thought-provoking images of the conflict. The visit is both confronting and essential for travelers to Vietnam.

2 p.m.
From the restaurant, it’s a 500m walk to the Reunification Palace. Fascinating highlights of the building inspired by retro 1960s design include an underground network of war situation rooms and communications bunkers, as well as the iconic balcony where a lone North Vietnamese soldier unfurled a conquerors’ flag on April 30 1975, to signify the fall of Saigon.

4:30 p.m.
About a 15-minute walk south of Rue Calmette, discover a resolutely modern gastronomic version of Vietnam. Artisanal chocolate is made from local fair-trade cocoa at Maison Saigon Marou – try a cinnamon and chilli glazed chocolate – while blends and single-origin coffees from Vietnam’s central highlands are served nearby in the elegant tasting workshop of La Caph.

6:30 p.m.
Ho Chi Minh City is also one of Asia’s top destinations for craft beer lovers. About 2km northeast of the chocolate paradise of Marou, try a tasting flight at the Heart of Darkness Brewery. Base beers include Kurtz’s hoppy IPA Insane, while the Futile Purpose Pilsner is infused with a refreshing hint of cucumber.

Discover Ho Chi Minh City’s most interesting cafe scene in the middle of a 1960s apartment building along Nguyen Hue pedestrian boulevard. The nine-story building at number 42 housed American military officers during the Vietnam War, but is now a ramshackle collection of cafes and avant-garde fashion retailers. It’s an ever-changing scene, so just follow the crowd down the washed-out stairs. On the third floor, Dosh Donuts combines seasonal flavors like longan and rambutan with a view of the city.

10:30 a.m.
Spend the morning in the leafy Da Kao district, home to many beautiful buildings from Vietnam’s French colonial period. Infused with floating clouds of incense, the Jade Emperor Pagoda features stunning woodcarvings and fantastical statues of Taoist deities, while the city’s excellent history museum is housed in a mansion of 1929 mixing Chinese and French styles.

1 p.m.
Nearby options for lunch include Banh Xeo 46A – for Vietnamese egg pancakes stuffed with pork and shrimp – or a hearty bowl of pho bo (beef noodle soup) at Pho Hoa. Essential side dishes include an overflowing plate of fresh herbs, quai gio chao
(Chinese fried bread) and cha lua (pork sausage wrapped in banana leaves).

3 p.m.
On the way back to the riverside accommodation, see two of Ho Chi Minh City’s most beloved French colonial buildings. Wedding photography sessions are still popular around the red-brick towers of Notre-Dame Cathedral, completed between 1877 and 1883, and the nearby Central Post Office was built about a decade later. Peek inside to discover glorious era maps of southern Vietnam and the city formerly known as Saigon.

6 p.m.
Ho Chi Minh City is most exciting after dark, especially when zipping through the neon-lit streets on the back of a Vespa scooter. The four- to five-hour experiences with Vespa Adventures include the Saigon After Dark route, filled with great street food and live music, and a special craft beer tour at four different locations in Istanbul’s most hopped-up beer hotspot. South East Asia.

Getting There
Changi Airport Transit with Singapore Airlines is the easiest way for New Zealand travelers to get to Vietnam. The recently launched low-cost airline Bamboo Airways offers direct flights to Ho Chi Minh City from Melbourne and Sydney.

Move
Charge your smartphone with a local Viettel SIM card and use the ridesharing apps Grab and Gojek for cheap cars and motorbike taxis around the city.

Where to stay
Vintage Indochinese style and touches of 1930s Art Deco design combine at Myst Dong Khoi, a centrally located stay by the river. There is a rooftop swimming pool with stunning views of Saigon.

Small Grants Program for Arts and Culture and Japanese Studies