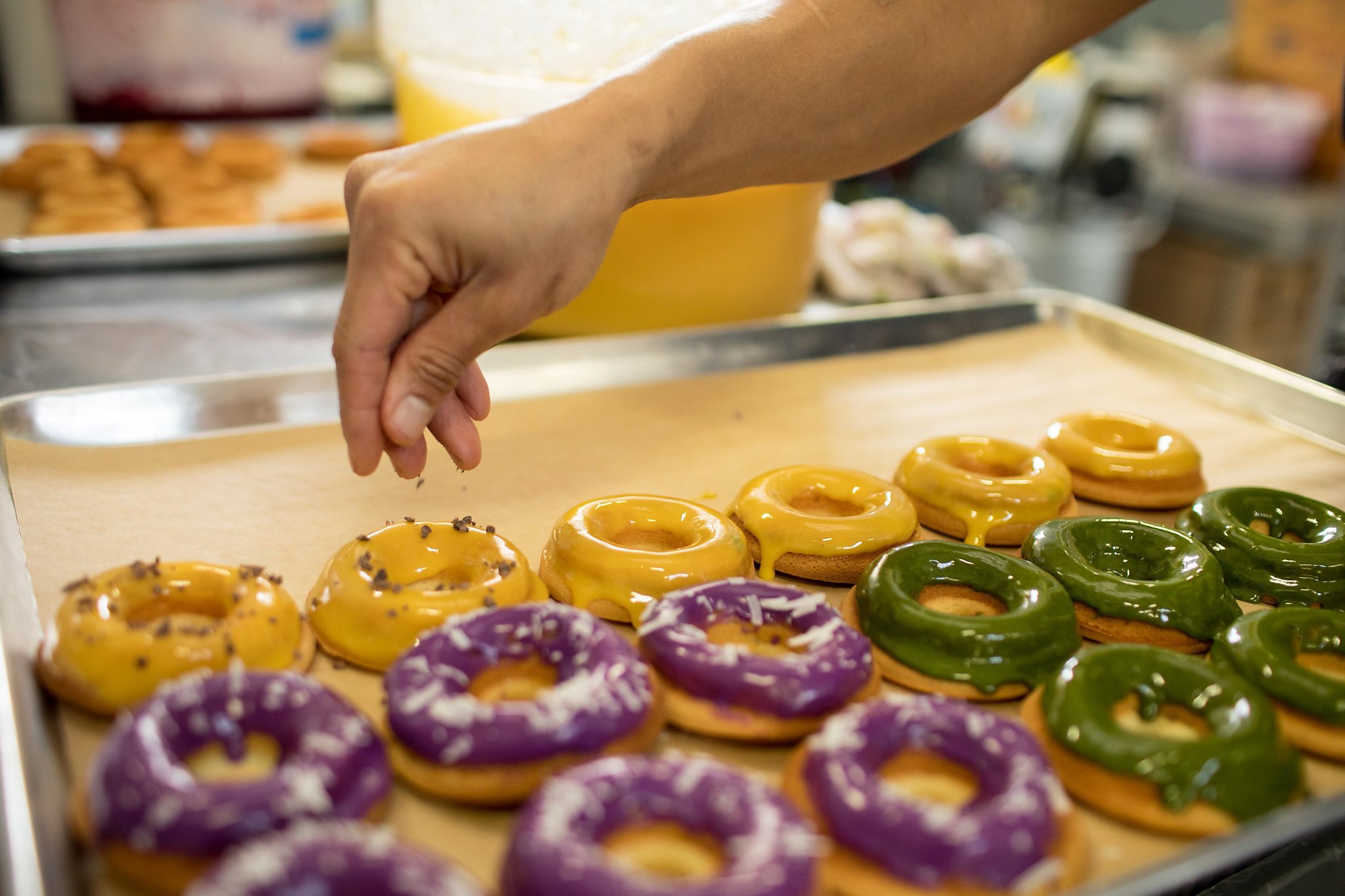 If you’ve bought a cup of coffee in the Bay Area in the past couple of years, you’ve probably stumbled upon the mochi muffin.

Mochi muffin – and its East Asian and Southeast Asian flavored cream cake brethren from Berkeley’s Third Culture bakery – has been slowly making its way into local cafe culture since 2017.

Imagined by Sam Butarbutar, the mochi muffin marries the flavor of kue lapis (a steamed Southeast Asian layered cake that Butarbutar’s mother used to make) with mochiko (flour ground from sticky rice), coconut milk and pandan. The end result – caramelized on the outside, dense innards, all sprinkled with black and white sesame seeds – is a wonderful blend of textures combining a chewy Hawaiian butter mochi and the brittle edges of an American brownie.

Butarbutar is an Indonesian immigrant who spent his childhood moving between the United States and the United States. The mochi muffin became the product that he and his business and life partner, Weenter Shyu, a Taiwanese immigrant, used to start their bakery business.

But the truth? The unsung heroes of the bakery could be the butter mochi donuts, a superior version of the American classic. The donuts have a crispy exterior but are chewy like a fresh marshmallow on the inside. They are baked and not heavy like fried donuts. Made entirely from Koda Farms organic Blue Star Mochiko flour (made from the only mochi rice grown in California), they are naturally gluten-free.

“Donuts are lighter and softer than muffins, and the mochiko gives it a mild flavor, which I wanted. This lets the glazes show through, ”explains Butarbutar.

And these glazes are gorgeous bursts of color and vivid flavor that greet you the moment you walk into Berkeley’s Eighth Street bakery, almost like a big box of colored pencils. There’s a bright camo green version made with matcha from Uji, Japan that tastes like a freshly whipped cup of tea, that’s slightly vegetal and bitter. There’s the marigold yellow of the mango-passion fruit frosting, which is both tropical and sour. And the ube coconut purple Mardi Gras, sweet, earthy and slightly nutty. Or a hot pink tablecloth of raspberry frosting with the perfect balance of tangy and sweet.

You can find muffins and mochi donuts at over 60 outlets across the Bay Area, but if you want to try the more experimental flavors of Butarbutar (and you do, trust me) you’ll want to visit the bakery. This is the Butarbutar laboratory, a place to experiment with flavors like yuzu, black sesame, saffron and pistachio honey and the next releases, which will be available on March 15: buko pandan, strawberries and cream, Vietnamese coffee. , blood orange and piña colada.

“I want to make pretty things, showy things,” says Butarbutar, “flavors from my childhood, like pandan and guava. Baking is like communication for me, and I want to expose people to parts of my culture that otherwise wouldn’t have been understood.

And it shows, from the variety of custard cakes he created (Thai tea! Churro!) Kimchee Jeanius product). Shyu’s influence, meanwhile, is manifested with the bakery’s matcha program, which includes matcha sparkling sodas flavored with lychee, raspberry or passion fruit puree.

Then there is this name. The third culture refers to the children of the third culture, which the two founders are: a person who has spent much of their developmental years living outside their parent’s culture. As a third child of the culture myself (my mom is white and my dad is from Gujarat, India), I immediately logged in with the name.

Growing up as a third culture child makes you different from others. The phrase was coined by American sociologist / anthropologist Ruth Hill Useem in the 1960s after living in India with her three sons for several years. According to Hill Useem, “The third child of culture establishes relationships with all cultures, without having full ownership.”

This rings true for both men. Both spent their formative years in two different countries: Butarbutar in Indonesia and the United States (Jakarta and New York / Los Angeles) and Shyu in Taiwan and the United States (Taipei and San Diego / Los Angeles counties) . Both had to learn English in America, and because Butarbutar moved between his two countries five or six times until he was 10 (he is now 30), he lost and had to relearn his skills. mother tongue every time he returned to Indonesia. “It was difficult to assimilate here,” he says.

Shyu, who immigrated at the age of 6 (he is now 29), learned English by going to kindergarten, where he was teased and had to overcome grammatical differences between languages, like saying ” Uncle Tony “instead of” Tony Uncle “. He didn’t hear the term “third culture children” until college, but says it helped him grapple with his identity growing up in Los Angeles. “I totally identified with it. I wasn’t white enough for white kids and I wasn’t Asian enough for Asian kids, ”he says. It was his idea to use the concept for the name of the bakery. “A surprising number of people thanked us for this and shared their own stories of growing up in another culture,” he says.

As a business, Third Culture has grown rapidly. When they started in 2017, both left their careers (environmental science toxicology for Butarbutar, luxury business for Shyu). At that time, Butarbutar was the only baker on the staff. He first learned from his mother, who had baked and sold black forest cakes in Indonesia, and eventually worked in local kitchens. Shyu always worked 9 to 5 as he took care of the business side of the bakery. The pair delivered their baked goods to the Bay Area before dawn in a black 2005 Toyota Matrix with the bumper glued on. They were driving home on Interstate 580 around 5 a.m. at sunrise. Shyu would take a nap, then go to work while Butarbutar baked, repeating the cycle. They sold about 100 pieces a week.

Two years later, they have 18 employees, a production space in West Berkeley, and they sell 20,000 pieces of product per week. They are opening a bakery / showroom in Aurora, Colorado this summer.

Dozens of cafes and bakeries offer products from the third culture, but several are often guaranteed to have a wider range than most.

As Butarbutar dips mochi fritters into a 12 quart container of ube coconut frosting, shaking off the excess, he speaks of acceptance. As gay immigrants, he says, the two struggled to be accepted and, for this reason, they tried to create a work environment filled with inclusion, a goal that has not escaped their employees.

“I really like this job,” says Diana Sanchez, their chef from Argentina. “It’s the first one I have in the United States where I feel respected by my bosses.”

A tour of Athens’ own Condor chocolate factory | Arts & Culture