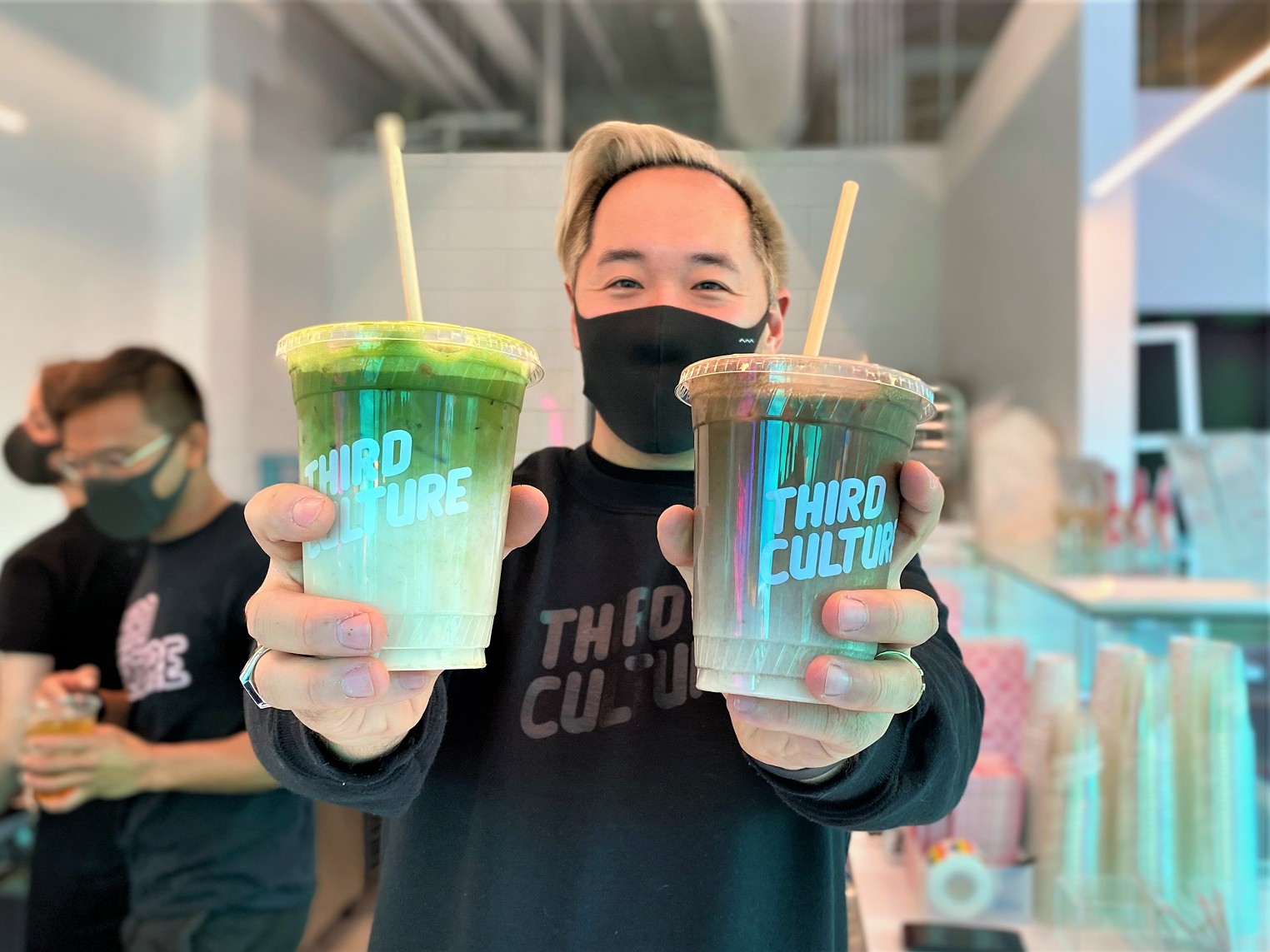 “Come for the muffins but stay for social justice,” says Wenter Shyu, co-owner of Third Culture Bakerywho just opened a cafe version of her mochi muffin and donut bakery that first landed in Aurora last year.

Shyu and his partner in business and in life, Sam Butarbutar, are serious about both, though their matcha-based pastries and drinks bring smiles to anyone who tries them. The couple, along with co-owner and CFO Rachel Taber, opened their bakery at 9935 East Colfax Avenue in Aurora in February 2020 as a place to celebrate Asian flavors and ingredients while serving as a haven for the LGBTQ community and people. of color. After a difficult and tumultuous year – both socially and economically – they have now expanded to 2500 Lawrence Street.

Shyu and Butarbutar originally founded Third Culture Bakery in Berkeley, California in 2016, opening a production facility after Butarbutar’s artisan muffin business took off in local coffee shops. Their mochi muffins, made mostly of rice flour, butter and coconut sugar, were a huge hit, and when they met Colorado native Taber, she persuaded them to consider Denver as an opportunity for expansion. . The couple loved Colorado so much they ended up moving here and bringing their bakery to town.

“When we first opened in Aurora, it was our first food venue and our first storefront for our baked goods, and the drinks were just an adjunct to the muffins and donuts,” Shyu says. “But there’s been a growing awareness of matcha. The cafe is going to focus on matcha – but, of course, we’ll still have the pastries.”

Shyu’s family is from Taiwan and Butarbutar’s is from Indonesia, and both have lived and traveled throughout Asia. Butarbutar’s recipes combine with Shyu’s penchant for Japanese teahouses to form a distinct, modern and blended concept, with matcha powder sourced from Uji, Japan; baking ingredients purchased directly from small businesses in Indonesia and other countries; and bright splashes of color “done in an Asian, queer, third-culture cafe style,” says Shyu. “We can’t go to Japan right now, so we’re trying to bring Japan here.”

Shyu’s respect for matcha is evident in the way he uses traditional tools to create a cup of tea, mixing the bright green powder in hot water with a bamboo whisk. The mug and whisk holder are both handcrafted by a Bay Area ceramic artist, and Shyu and Butarbutar even came up with a unique design for this whisk holder that includes a built-in drip tray – something something they had never seen in Japan.

You can buy traditional green matcha (or toasted matcha, if you prefer a more roasted flavor) by the cup, or have it mixed into lattes and other hot, iced drinks. The new café will offer a wider selection of drinks than the Aurora Bakery, and Butarbutar is also expanding the food menu to introduce matcha soft serve ice cream as well as pandan waffles this summer. “Pandan is everywhere in Indonesia,” he says of the herb, which smells and tastes like a cross between fresh bread, toasted rice and vanilla. “Every household has a plant in its garden.” 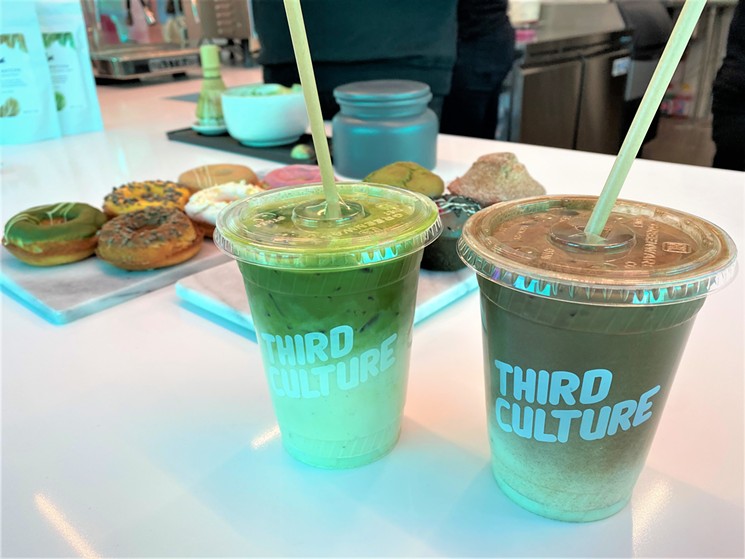 Iced matcha lattes and mochi muffins and donuts are some of the menu items at Third Culture.

Butarbutar insists on using fresh pandan leaves rather than the more common extract; it also insists on other raw materials such as black sesame seeds, ube (purple yam), coconut, lychee and mango. Many of them became hard to find during the pandemic due to supply chain disruptions, so he started buying directly from growers and growers.

The Third Culture was just beginning to shine in Aurora when the pandemic hit last March, Shyu recalls; he and his partners closed for a week, then reopened with a new online ordering system for takeout. They also began shipping muffins, eventually delivering their products to customers in all fifty states.

Then, a few months later, news of George Floyd’s murder broke and protests erupted across the country. “I was a little scared to express anything through our platform,” Shyu recalled, adding that he “felt empowered” by Butarbutar and Taber’s support.

The Third Culture team decided to support the Black Lives Matter movement, and when violence against Asians, especially older people, started making the news, they decided to do even more. “At first, I felt so helpless, but then we came up with the idea of ​​making safety kits,” says Shyu.

They began assembling kits that included a keychain alarm and pepper spray, and were designed to be distributed to vulnerable members of the Asian American and Pacific Islander community. The first batch of 100 went quickly and was followed by a request from a senior living organization for another 5,400. Third Culture used proceeds from bakery sales to fund the kits and also began fundraising to continue the project. 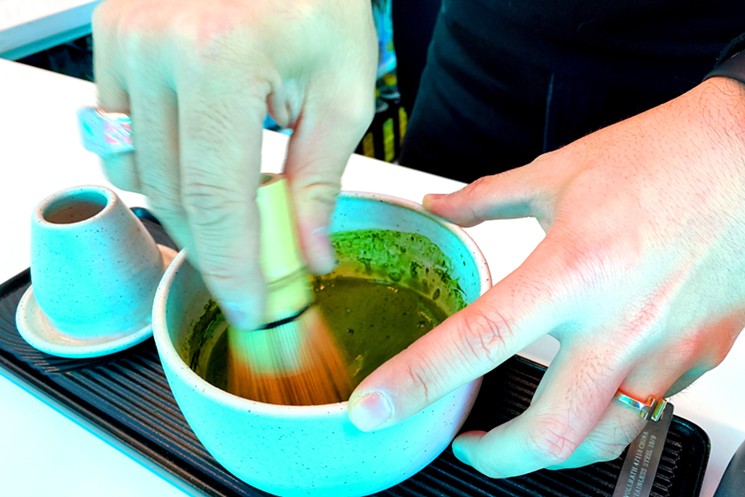 Wenter Shyu whips up matcha tea which will be added to the lattes.

“It sounds corny, but I just want this bakery to be a force for change,” says Shyu.

While you won’t find overt social justice messages inside RiNo’s new cafe, you’ll encounter an ever-changing rainbow of colors created by floor-to-ceiling prismatic window treatments, reflective chrome wallpaper which softens the light with its bumpy surface, and the bright colors of the pastries themselves, especially the purple, yellow, orange, green, and pink icings on the donuts. A neon sign glows bright pink with the phrase “It was always you.”

Even without overt social statements, Third Culture’s message is clear. Each box of take-out pastries is sealed with a rainbow flag sticker – which has prompted complaints from a few customers, according to the owners. But they turned it into a form of marketing, using Butarbutar’s response to make their point: “If a little sticker depicting love and harmony can offend someone so deeply, then maybe that we are doing something good.”

“Sam and I started this thing with $3,000 in our pockets and nothing else – no loans and no debts,” Shyu points out. The duo plan to continue to slowly grow the business by following the same approach and using the RiNo cafe as a model for future locations, with the next one planned for Walnut Creek, California.

“We’re just shamelessly what we are now,” he adds. “We want to be as loud as possible and just be this gay-as-fuck bakery.”

Third Culture Bakery & Matcha Cafe is open behind Uchi at the corner of 25th and Lawrence streets, with an entrance facing the courtyard of the S* Park development. Hours are 9 a.m. to 4 p.m. daily. To visit thirdculturebakery.com for details and online ordering.

From cassava cake to poppy seed bread to yogurt and lemon: our eight best vegan recipes of the day!