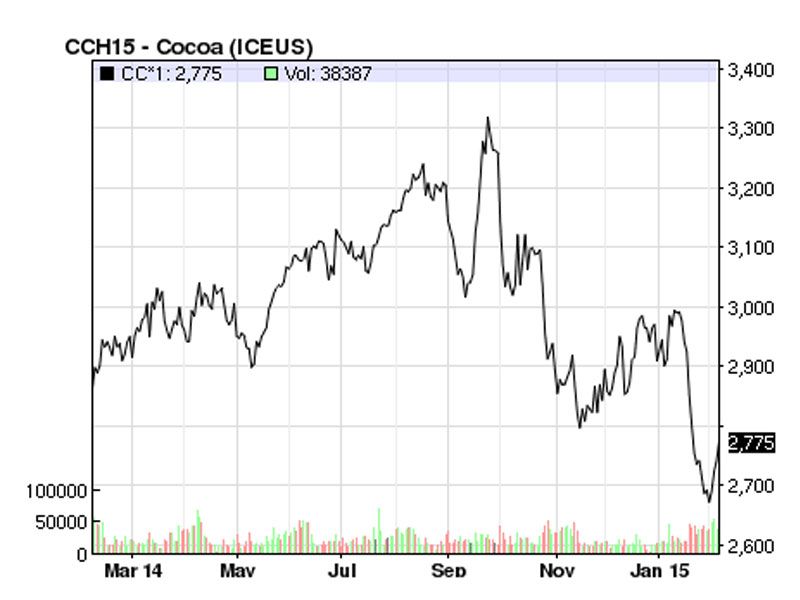 Look at a cocoa price chart from Valentine’s Day 2014, and you’ll see a jagged line as jagged as a broken heart.

There are many peaks and valleys in the price line, but the most significant came last September. The line shot up sharply, stabilized at the highest cocoa price in several years, and then dropped to its original level. It left an upward point of almost perfect symmetry. This peak was Ebola, converted into the price of cocoa. (And the most recent drop is a result of falling demand for chocolate.)

The cocoa makes a long, winding journey from the bean to the bar. Harvesting begins on farms in tropical countries, especially West Africa, and passes through ports, shipping containers and processing plants. But before reaching your bag of M & Ms’s, cocoa beans also cross an intangible dimension: the financial world of price charts, futures and commodity ETFs. Since the establishment of the New York Cocoa Exchange in 1925, cocoa has been bought and sold in an abstract form.

Before diving into the financial world of cocoa, visit a typical farm. Cocoa requires a tropical climate and shady conditions, which means that cocoa plantations don’t look much like wheat fields or orange orchards. Trees grow under a canopy of taller trees, so many farms look like cultivated rainforest. On average, cocoa plantations are small farms, around 4 hectares, the size of only 8 football fields. (The average farm in the United States, on the other hand, is around 95 hectares.) Although cocoa plantations can generate relatively large profits, the long-term survival of some chocolate makers are busy growing crops. heat and drought resistant trees.

Farm workers who harvest cocoa are, on average, extremely poor, some below the World Bank poverty line of $ 1.25 a day. A few years ago, a German photographer Jochen Weber went to a Brazilian cocoa plantation to take some pictures. He bought Nutella – the sweet hazelnut chocolate spread – as a gift to the farm workers who showed him around. All considered it a great luxury, and some had hardly ever encountered the product before. “You can’t work on a cocoa plantation without knowing Nutella! He remembers thinking. A worker, a woman named Leni, found it so delicious that that very day, she finished the entire container. “She said she couldn’t take it, it was so good.”

Almost all of the world’s cocoa is grown in developing countries and consumed by industrialized countries. The top four producers — Côte d’Ivoire, Nigeria, Ghana and Indonesia — are all in the bottom half of countries in terms of GDP per capita. Even more strikingly, the top ten countries ranked by chocolate consumed are all in the top 15 percent. Nine of these countries are in Europe. (In 2012, the United States was ranked 15th.)

It takes a long and complicated supply chain to handle a product that is consumed thousands of miles from where it is grown. “I always thought there was a giant river flowing into these ports,” says John Helferich, who led research and development for the US division of Mars, Inc. until 2005. In a country like Côte d’Ivoire, small farmers first sell to middlemen, who sort and transport large bags of beans to shipping centers like the port city of Abidjan.

From the port cities, global companies are starting to dip their fingers in the jar of cocoa. Intermediaries sell to international trading companies like Cargill and ADM, which ship the grain to port cities like Philadelphia and Rotterdam. Cocoa beans are a long way from becoming chocolate, but at this point they have entered the financial world.

There are several ways that commodity traders can participate in the cocoa market, but the most common is with cocoa futures. A futures contract is much like a purchase order: it allows the buyer to get a low price. If this price has increased a year later, the trader has a supply of discounted cocoa to resell at a profit. Unlike a bad check, however, traders suffer the consequences if prices fall. If you buy 1 ton of cocoa futures and the price drops, you will be forced to pay the higher price from last year.

Commodity traders can work for food manufacturers, agricultural trading houses, and investment groups like hedge funds. Jonathan Parkman, who works at a trading house called Marex Spectron in London, explains that the cocoa world is a triangle of stakeholders, all making different bets on cocoa prices. “Producers want stable and high prices,” he explains. “Chocolatiers want low and stable prices. The investor wants a trending market without really caring about the direction.

In other words, farmers want to sell their crop at a higher price, while chocolate companies want to get a good deal on their supply. Commodity traders don’t care which side wins, as long as prices go up or down. (They can make money from falling prices by short selling futures contracts.)

As with any commodity trading, traders gain an advantage by knowing more about market trends than their competitors. “A lot of companies will be counting the pods, so they’ll go around the trees and actually count the number of cocoa pods,” said Emile Mehmet, bulk product manager at a London-based research agency Informa. Decades ago, large chocolate producers like Mars would send representatives on pod-counting expeditions, in order to detect in advance the low yields to come. These days, this is a fairly common tactic to provide only a slight advantage. Other sources of information related to cocoa: El Niño predictions, processing figures of cocoa grinders and quarterly revenues of major chocolate makers.

Cocoa prices are relatively volatile compared to raw materials like corn or wheat. “Much of the world’s production is concentrated in a small part of the world,” Mehmet explains. This means that local forces can have a global impact on prices. For example, the annual Harmattan trade winds in West Africa can cause a dusty haze that floats in the air for days, preventing cocoa pods from developing properly. According to cocoa farmers in Côte d’Ivoire, this is the case this year.

A trader who gets wind of such news can buy cocoa futures, the value of which will rise when lower yields push the price up. In the past, cocoa prices have increased during outbreaks of fungal and insect diseases. In the future, cocoa prices could increase if climate change reduces the area where cocoa can be grown. (On the flip side, climate change could also expand or simply displace cocoa-growing regions.) It’s an embarrassing truth about commodity markets – and stock markets, too – that traders can make a lot of money. from bad news.

Which brings us back to Ebola. Last September, as the disease spread rapidly in Liberia and Sierra Leone, traders were following the news closely. Had Ebola spread to cocoa-growing regions, it could have decimated the workforce and disrupted the supply chain. As the cocoa price chart shows, investors, like grocers before a snowstorm, recognized the risk of Ebola and started buying cocoa. Prices have skyrocketed and traders who were ahead have amassed some extra cash. However, when it became clear that Ebola would not reach Côte d’Ivoire, prices returned to their previous levels.

So what are the commodities markets for, other than making money? Historically, they were created to allow producers to stabilize their supply. Let’s say I sell milk, but my customers complain that milk prices skyrocket every time a blizzard blows in Wisconsin. Futures help me get a constant price and sell a more reliable product. This is why the great chocolate makers hire traders: they don’t want the prices of their products to skyrocket and plunge with the price of cocoa. That’s why the prices of chocolate bars don’t vary much – the futures prices for milk, sugar, and cocoa keep them consistent.

Over time, however, commodities have become more and more abstract and speculators outside the chocolate business have stepped in. Some commodities traders might say that’s a good thing, if it is. helps prices take into account real world issues like weather and disease. John Helferich disagrees. “Commodity traders can sometimes shoot producers and farmers,” he said. A trader can buy cocoa because it is a relatively better deal than, say, gold. This would increase cocoa prices whether or not the cocoa crops are strong.

What traders, growers and growers would likely agree on is that very few people are involved in every step of the way from bean to bar these days. Poor farm workers who harvest cocoa pods may never taste the chocolate produced, while investors who market thousands of tonnes of cocoa may never see a raw cocoa bean. The gift and the burden of globalization is that during it all, consumers are still getting their chocolate.

Lifestyle of the week: From cocoa to chocolate Valentine’s Day | Earth