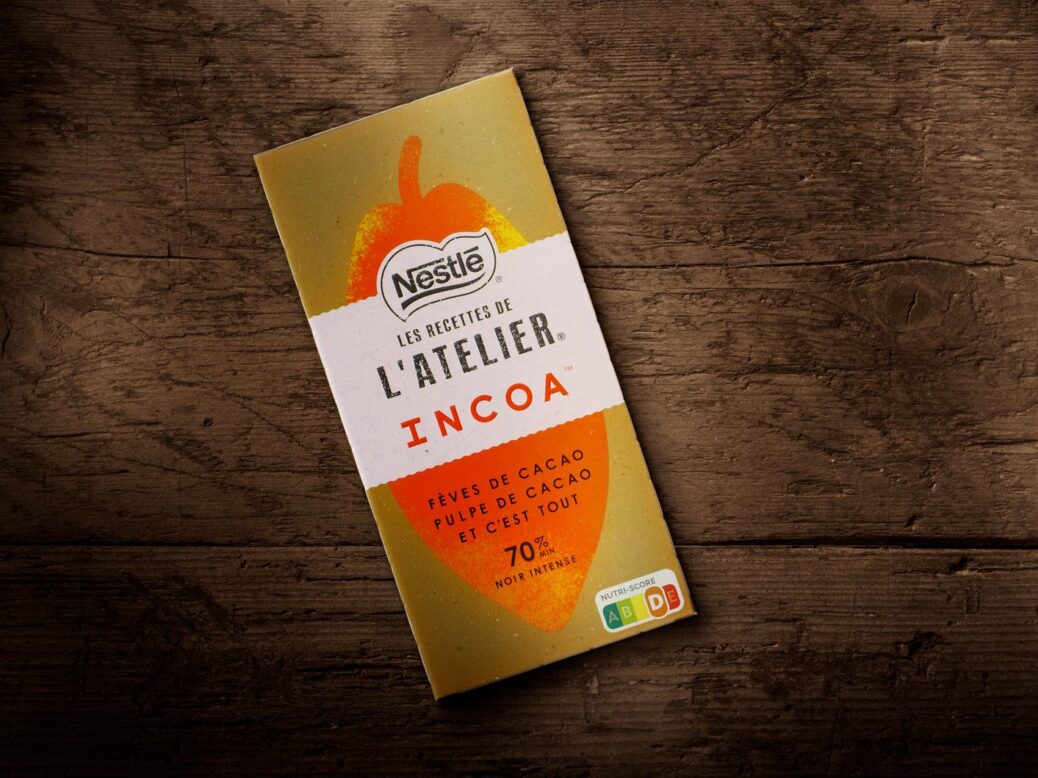 The cocoa fruit is becoming a new kid on the block, with some major players in the confectionery industry believing in its potential as an ingredient beyond being the world’s source of cocoa. Products are slowly appearing on the market and research suggests there are more to come.

The cocoa fruit has been used to produce cocoa from its beans for chocolate and bakery applications. But its other potential attributes have long been overlooked in the Western world until very recently.

The hard-shelled fruit comes from the Theobroma cacao tree which is believed to have originated in Brazil, Colombia and Peru, but is now widely grown in other South American countries, as well as Africa and Asia, where it is also known for its sweet and pungent taste. juice.

Its beans or seeds have traditionally been extracted, fermented and ground into cocoa, while the outer husk or skin and the chewy white nutritional pulp surrounding the beans have been discarded. However, over the past two years, product developers have discovered that these other cocoa fruit components, including the juice, can be used in confections and snacks. And with potential applications in ice cream, beverages and dairy as well.

The first products hit the market

Proponents say the juice and pulp can replace sugar in foods and drinks, while the cocoa fruit also contains antioxidants, thiamin, vitamin B6 and magnesium. It is a source of theobromine, an alkaloid believed to lower blood pressure and reduce inflammation and bad cholesterol. And the casing can be ground into flour as an alternative ingredient to other fillers.

The fruit could appeal to the increased interest in recycling and reducing food waste, while cocoa fruit farmers could earn a better living wage by earning more from the crop they produce.

Nestlé, Mondelez International and Barry Callebaut, alongside its subsidiary Cabosse Naturals, have been working on products over the past two years – primarily chocolate – using various parts of the fruit, either for a unique citrus fruity flavor or for natural sweetness.

Nestlé first tried it with a KitKat in Japan in 2019 – KitKat Cacao Fruit Chocolate, a 70% dark chocolate produced from the beans and sweetened with the pulp. The world’s largest food company then followed suit this year with Incoa, a 70% dark chocolate bar under the Les Recettes de L’Atelier brand. The product was originally launched in the Netherlands and France, and again used the paste with no added refined sugar.

Louise Barrett, head of Nestlé’s technology center in the UK city of York, which handles global confectionery R&D, says the thought process began two years before the launch of KitKat as Nestlé explored whether the other parts of the cocoa fruit could be used in chocolate. “Now it’s gaining momentum because it’s a great product in its own right,” she says.

“Also, I think there are great elements of sustainability if you think about how today what’s wasted as a material. I think that’s where it’s also gained in interest and popularity, but above all it is a really interesting and tasty ingredient.

“We took out all the sucrose that we would typically use in a dark chocolate and replaced it with this cocoa pulp to naturally sweeten it. We still want to explore other ways to use it, but we’ve been working on developing a commercialization process. The supply chain for this type of ingredient didn’t exist at all two and a half years ago, so it’s been quite a technical development to get us to this point.

Mondelez, in partnership with Barry Callebaut, was also on board in 2019 with CaPao Cacaofruit Bites, snacks incorporating beans, rinds, pulp and juice, with the addition of nuts, seeds, spices and spices. herbs.

Shannon Neumann, chief innovation officer at SnackFutures, the Mondelez innovation and venture capital center behind the CaPao brand, explains the company’s interest: “We know that 30% of all The world’s food is wasted, and the resulting challenges are environmental, as well as societal.

“Our supply chain contains this fantastic fruit that we have used for centuries to make chocolate, but it is only 30% of the whole fruit; 70% of this fruit is wasted. The idea becomes: how can we better use these resources both to help prevent food waste and to provide farmers with more income for their crops? »

Neumann says the pulp has a pungent, pungent flavor, much like a combination between the exotic fruits lychee and mango, and honey. It has a “sweet tropical taste”, while the husk is “relatively neutral but with an earthy and nutty taste”, making it ideal when ground as a flour substitute.

Barry Callebaut, the world’s largest supplier of cocoa and chocolate products, went it alone in June this year with its WholeFruit Chocolate bar under the Cacao Barry brand. Launched in collaboration with Cabosse, WholeFruit is a 100% “pure cocoa” dark chocolate serving chefs and artisans, initially in the UK, France, Italy, USA, Canada, Japan and Brazil.

Sylvie Woltering-Valat, marketing manager at Cabosse, says: “Millennials and centenarians have turned to products that are not only tasty but also nutritious, and which have a positive impact on the planet.

“It can be used as a replacement for refined sugars but – where we think there is much more exciting news – we are bringing a real new flavor to the market. It lends itself very well to applications like ice cream, drinks and snacks.

“With WholeFruit, we made a chocolate from 100% pure cocoa fruit and sweetened the chocolate with the pulp. The approach was not to replace the sugar, but to really magnify the taste of the fruit in the chocolate .

Woltering-Valat explains the potential. “We are building a new category of chocolate that meets consumer health and wellness needs because it tastes unique, nutritious and good for the planet, as we now recycle the pulp and outer layer of the fruit .

“As with any new breakthrough, it takes time to establish. Certainly you have to raise awareness, you have to familiarize people with it, experiment and then you convert it to the next level.

Ultimately, however, it’s all about taste and built-in preferences. Raising awareness around a product like the cocoa fruit, with its unique flavors and environmental credentials, is one thing, but it’s a different ball game to convince consumers accustomed to their favorite chocolate, for example.

“The only challenge we’re going to have in making these products commoditized is what [the cacao fruit] replaces. Sugar is super plentiful and super cheap,” Steve Osborn, director of Aurora Ceres Partnership, a UK-based food and drink consultancy, tells Just Food.

“We can sit here and say idealistically ‘this is great, we get the sweetness from the natural pulp of the cacao fruit, we use all the waste.’ That’s very good and we should welcome this kind of philosophical change.The other aspect, of course, is that we are very attentive to our taste profiles.

Mondelez, Barry Callebaut and Cabosse recognize that their new products are premium priced.

Woltering-Valat de Cabosse says, “Our ability to crack this fruit is really our ability to produce large quantities with very high quality products that preserve the nutritional value and delicious flavors. This comes at a cost, obviously, and we are indeed looking at more premium pricing types.

Price is an issue to overcome if chocolate confectionery, snacks and other emerging cocoa products are to appeal to the mass market.

“You have to get into that main market,” says Osborn. “Otherwise it ends up being a premium niche. And while a high-end niche has its place, there’s always a ripple effect [needed]; how to get consumers to change their taste profile.

“I’m always fascinated to hear about these products. I think it’s the right direction and it’s the right philosophy, but it’s about how we act against this massive trading machine. And that is not easy.

The need for scale

Nestlé’s Barrett says greater scale is needed to reduce costs, especially when it comes to taking a fresh raw material that is 80% water, then drying it and converting it into various products different. “It’s about understanding how we can make it a more commercial supply chain and ingredient,” she says.

However, while Neumann admits that Mondelez CaPao Cacaofruit bites belong to the premium segment, she says that “in the world of confectionery, it depends on how you optimize your formula; you might be adding that ingredient, but there might be another area where you might be able to cut some costs to keep it neutral to the consumer.”

However, from the perspective of farmers, developments could make a difference. They could potentially earn more from the same number of trees, which previously only generated income from the beans used to produce cocoa, with, to return to Neumann’s point, 70% of the fruit being wasted.

Woltering-Valat develops the theme. “We make better use of those resources, but also all the effort they put into growing the fruit, in the energy, in the water, in the time they invested.”

Neumann says the potential for using previously discarded parts of the fruit aligns well with growing awareness of recycling and food waste, both from manufacturers and consumers.

In the United States, for example, the non-profit organization Upcycled Food Association was founded in 2019, formed in its own words by “the upcycled food companies themselves, who recognized the power of collaboration in the growth of a thriving food category and environmental movement”.

SnackFutures by Mondelez is part of this association, which in April launched a product label that would be the world’s first certification mark for recycled foods.

At Nestlé, Barrett says an 80% dark chocolate Incoa variety is on the way, declining to provide further details, while Neumann says CaPao Cacaofruit Bites will be joined in October by a “new format that we’re almost ready to talk about but not quite yet”.

Cocoa fruit juice may be the new hot health drink