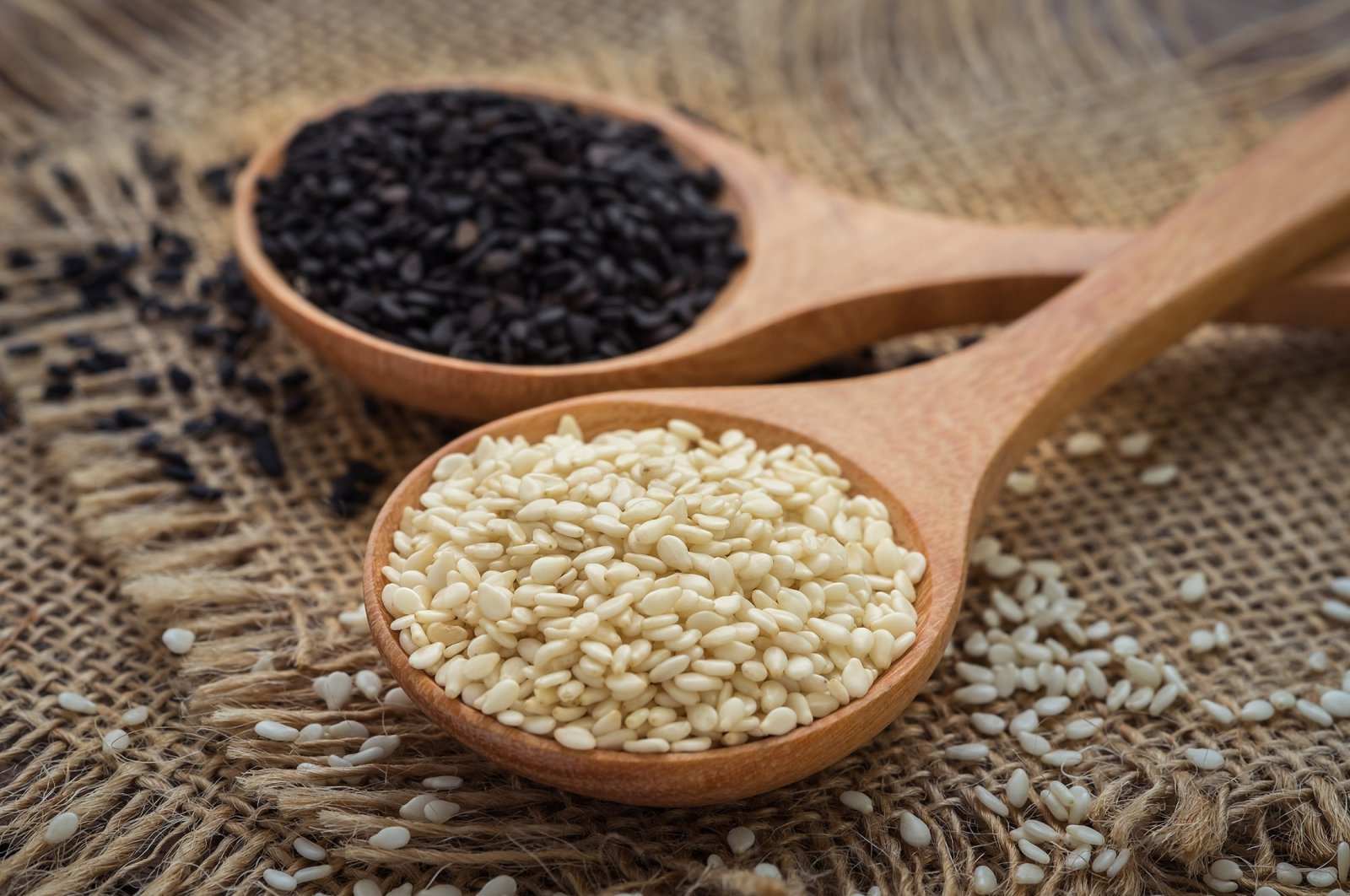 It is the season of sesame cultivation in Turkey, as the precious seed is painstakingly prepared for harvest and used in a wide variety of iconic dishes of Turkish cuisine. Called “susam” in Turkish, sesame seed holds a special place in many ceremonial foods in Turkish culture.

These days it’s like living on “Sesame Street” as my particular road is lined with sesame fields which at this time of year are being prepared for its harvest. If you haven’t seen it yet, harvesting sesame is a painstaking but visually spectacular process. First, the long stems with red leaves are cut off at their base, then positioned and tied into a tipi-shaped cone, where they will wait a fortnight for the seeds to dry and ripen. When ripe, the pods of the sesame plant will split open releasing the seed, this is where the phrase “open the sesame!” Is pronounced in “Ali Baba and the Forty Thieves” of the popular tales “A Thousand and One Nights”.

Called ‘bursting’, this characteristic is the reason why sesame is traditionally harvested by hand, which continues to be the predominant process in Turkey. Sesame seeds are best harvested when dry, and their small size means the sifting process is a chore, too. But the results are wonderful little seeds that contain almost 40% oil, 18% protein, and contain B vitamins and minerals like iron, magnesium, calcium, phosphorus, and zinc.

Sesame seeds play an important role in Turkish cuisine and feature in many ceremonial and popular foods. The name “simit” is also synonymous with seed and can be used to refer to the sesame seeds themselves. Simit looks like a hand-sized round loaf-shaped bagel with a hole in the middle that can be sliced ​​down the center and eaten with spread or melted cheese. However, this is where the resemblance ends as the simit is soaked in water with molasses and covered with sesame seeds then cooked until crisp and golden.

“Kandil simidi” is a kind of mini cookie variation on the classic simit and it is offered during the religious festivals of Kandil. It is a kind of crunchy cookie, the hallmark of which is that it is covered with sesame seeds. Sesame and black cumin seeds also garnish the round flatbread “Ramazan pide” cut into baklava that the Turks will wait to take out of the wood-fired oven of bakeries during the holy month of Ramadan.

Once is good, but twice is better!

Where sesame really shines in Turkish cuisine is in tahini, “tahini” in Turkish, a thick, smooth paste made entirely from roasted, ground and peeled sesame seeds. Yet another painstaking process, to prepare tahini, the sesame seeds are soaked in water and then crushed to separate the bran from the grains. The crushed seeds are then soaked in salt water to allow the bran to sink. The floating grains are then skimmed off the surface, roasted and crushed to produce the thick oily paste called tahini. There is also the double toasted variety called “çifte kavrulmuş tahin” which can be found in deli meats and specialty stores and has an even richer, almost smoky flavor.

A staple of Middle Eastern cuisine and more colloquially known to be an essential ingredient in hummus, a dish also served in Turkey where, if you’re lucky, they’ll cover the hummus with pastırma or pine nuts, then roast it until it is bubbly and almost caramelized. There is also the meze called “hibeş”, which is native to Antalya and incorporates tahini with garlic, lemon juice, olive oil, chili flakes and cumin. Lebanese meze “mütebbel”, found in eastern Turkey, pairs tahini with smoked eggplant, garlic, olive oil and pomegranate molasses in an ornate dip pine nuts.

While as a salty component, tahini is more familiarly used in hummus and as a dressing for a white bean salad, in Turkey tahini is actually a major component for a number of desserts and confectionery. Tahini will also be served regularly in a Turkish breakfast, as one of the country’s most beloved flavor combinations is a blend of tahini and pekmez, the latter usually referring to a sweet grape molasses.

The first reference to halva dates back to Persia in the 7th century and would refer to sweets made from dates and milk or semolina. The Ottoman Turks took the concept to a whole new level by inventing the sesame-based version that we know today as “helva” in kitchens called “helvahane” which were devoted to the preparation of sweets, preserves and other desserts.

Halvah is available in a wide variety in Turkey, including those that are quickly prepared using flour and semolina as the base. “Tahin helvası” on the other hand is another story. It consists of a square-shaped block of crumbly granulated sugar and tahini that melts in your mouth. The mixture literally consists of half tahini and half soap syrup, called “çöven” in Turkish, or marshmallow root used as a stabilizer. The mixture is then constantly stirred using a large wooden spoon, with occasional additional flavors such as cocoa powder or pistachios included in the mixture. When it reaches the right airy and stringy consistency due to decomposition of the fibers, the mixture is quickly placed in a rectangular mold where it remains overnight to solidify.

Halva is cut into bite-sized cubes and served for special occasions such as births, circumcisions, weddings, religious gatherings, or ceremonies to send soldiers. There is also a dessert called “fırında helva” in which the tahini halva is cooked with milk and lemon juice, resulting in a deliciously sweet and caramelized gooey mess that you can dip chunks of bread into like a fondue. Helva can be found anywhere and everywhere in Turkey, however, there are also local shops dedicated to all things sesame called ‘helvacı’ where you can buy tahini, kandil simidi once and twice. and of course halva.

There are a number of pastries that involve tahini, such as ‘tahinli çörek’ which is a sweet, round, spiral-shaped bun stuffed with tahini and can be found in most bakeries, bakeries and patisseries. from the country. In Central Anatolia, they bake an oven-baked flatbread called “tahinli pide”, which is covered with tahini paste. There are even variations of baklava in which tahini and crushed walnuts or pistachios form the base.

Brittle sesame, in Turkish for ‘susam krokanı’, is a popular snack and sweet and crunchy cereal bar-sized versions can be found next to almost any cash register in a market or station. -service across the country. A nutritious snack to start with, candies are made by roasting whole sesame seeds and honey or sugar, providing a natural protein-rich energy boost on the go.

“Akide şekeri” is a hard candy in which you can see pinches of sesame seeds inside the delicious opaque pink balls of granulated sugar. The latest nut craze is “susamlı fıstık”, a new take on peanuts in which they are coated with a sweet and crispy coating of sugar and sesame seeds. Last, but not least, is the “Ottoman tahin pekmezli küp”, a kind of sundae consisting of an authentic Kahramanmaraş ice cream made with mastic, a variety of halvas including tahini halva, grape molasses and crushed pistachios.

Keep up to date with what is happening in Turkey, its region and the world.