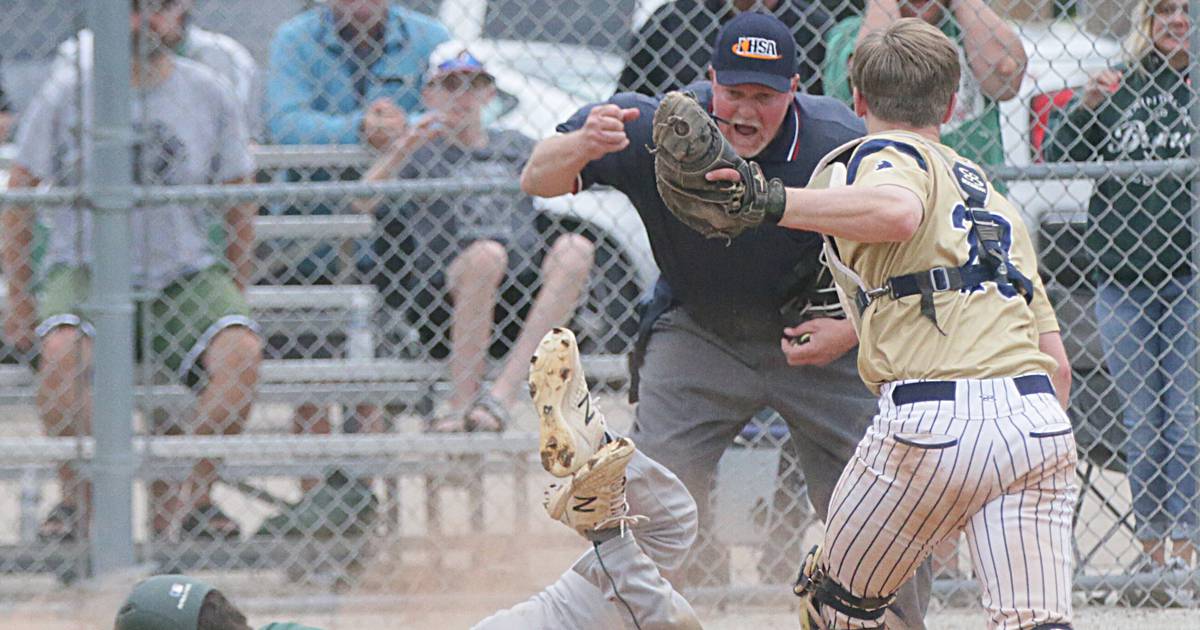 OTTAWA – The term instant classic is overused in this era of high-profile, media-watched sports, but it would be hard to find a player, coach or fan who could leave Wednesday’s Marquette Class 1A Regional Semi-Final. without shaking their head and saying, “What a great game.”

Marquette and St. Bede Academies fought tooth and nail for 10 innings, each making several game-changing or game-saving plays on the ground and at home plate heading into the final inning.

That’s when – with the bases loaded – the Crusaders’ Hayden McKenna hit hard ground in the middle that Bruins shortstop Brendan Pillion lined up, but slipped on the wet grass and didn’t couldn’t throw home to prevent Logan Nelson from scoring the game-winning run for a wild 6-5 MA win at Masinelli Field.

“I hit the ball well all game, but I just couldn’t find the right spots,” McKenna said. “I was still in solid contact, so I was like, ‘What’s going to stop me from making that last run?

“Those [St. Bede] the kids were tough every time, so we had to keep playing defense, and we did until we finally got through.

The game made a game-winning pitcher from Aiden Thompson (5 IP, 1 ER, 5 H, 6 K, 0 BB) and handed a tough loss to Auggie Weisbrock, who trailed starter Seth Ferrari, Alex Ankiewicz, Brendan Pillion and Jake Delaney at the mound for SBA.

He also sends No. 1 seed Marquette (27-3) to the championship game at 11 a.m. Saturday against the winner of Thursday’s other semifinal between No. 3 seed Newark and No. 7 Serena. The No. 8 seed St. Bede finishes 7-19.

“Credit Saint-Bède. We knew they were going to be improved. We cast our two best guys available today, and both cast great, but everything [St. Bede] got today, they won,” said MA coach Todd Hopkins. “But also give credit to our guys. They didn’t hide their heads even when they were leading 4-2. We kept having guys and equalizing, and even though some opportunities didn’t work out, they kept fighting.

“All of us coaches can talk about tournament days, but what these kids went through today, they graduated high school tournament baseball. You can’t teach that. You have to play under pressure, and we did a hell of a job with that. Saint Bede too.

The Bruins, who had lost 22-4 to Marquette in their season opener at Masinelli on March 15, took the upper hand in the first against starter Cru Nelson (5 IP, 3 ER, 6H, 1 K , 2 BB) on Pullian’s RBI field. Le Cru tied the game in the second when Tommy Durdan singled and later scored on a wild pitch, but the Bedans came back on a Jayce Ladzinski bouncer in the top of the third. Again MA tied it when Julian Alexander robbed the house.

The Bruins took a 4-2 lead on Ladzinski’s two-run single in the fifth. However, Marquette responded when Sam Miter threw a run and later scored on an error, then in the sixth saw center fielder Alexander throw to McKenna to pin Colin Nave to the plate to keep it going.

The tie went to 5-all on Alexander’s RBI single in the sixth and an SBA’s Logan Humpage single off Thompson. However, Thompson shut down the visitors in order in each of the next three innings.

With one out in the 10th MA, Nelson singled, Miter got his third hit of the day and Brady Ewers walked to load the bases. McKenna then slammed his ground down the middle which Pillion grabbed, but slipped as he turned home, tagging Nelson.

“We’re hams and eggs that just played our butts today,” St. Bede coach Bill Booker said. “We told the kids we believed in them when no one else did, and we played 10 rounds with a really good team. It was a great game for both sets of fans. Our children will suffer a little, our elders especially, but we have nothing to be ashamed of.

“The kids showed great hearts today. If we were to come out with a loss, I can live with that playing this way against a program that I respect a lot. I’m so proud of them.