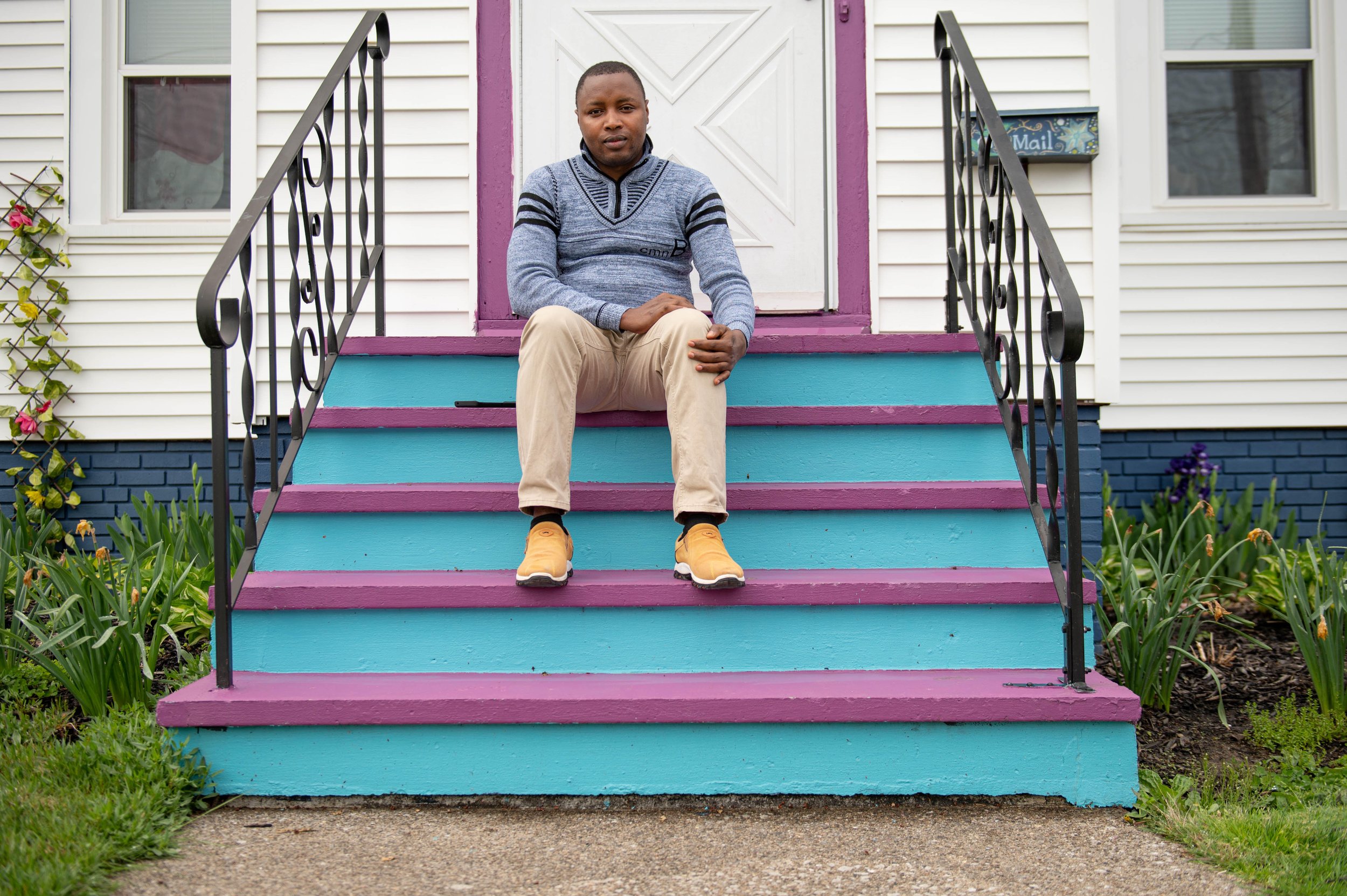 Hakizimana Muvunye is a man who does his best. A refugee from Congo, Muvunye is the owner of Asante Landscaping, where he currently only has five customers, so he also drives Uber.

“I have to take care of my family,” said the man with a wife and five children, who is also a pastor.

Muvunye arrived in Cleveland in February 2016 from Uganda after fleeing the Democratic Republic of Congo. Six years later, he’s striving to have a more successful business so he doesn’t have to drive Uber. He relies on US Together Inc., a non-profit agency providing services to refugees and immigrants, and its Microenterprise Development (MED) program to help it achieve this goal. But can MED do it? The program that helps “eligible refugees and immigrants develop, finance and grow small businesses” is threatened with closure when its funding runs out in the fall.

Muvunye said the MED program was crucial to start Asante Landscaping. As a participant, his staff helped him register the business and obtain business cards.

For the past five years, the MED program has received $70,000 a year in federal funding from the Federal Office for Refugee Resettlement (ORR), but the grant expires in September. US Together officials are working on replacement funding, but they haven’t secured the money yet. The nonprofit agency applied for state and foundation grants to continue the program.

“We have a little bridge funding available that could sustain us for a few months after September, but we’re all working hard to make sure that doesn’t happen,” said Evan Chwalek, economic integration coordinator at US Together. “Everyone is aware of the opportunities to expand MED’s reach in collaboration with other like-minded groups or with the city, and we’re very excited to see where that leads as well.”

Kylie Hislope, who started as MED program coordinator in April, said keeping the program going was key to creating economic independence for local refugees. She wants to use her background in corporate finance and non-profit organizations to help refugees build sustainable businesses.

“Helping our participants achieve their financial milestones better positions them to…create financial independence and provide them with growth and prosperity in their new home here in the United States,” said Hislope of the MED program.

Launched in Cleveland in 2018, the MED program is aimed at refugees who want to start small businesses. The program provides training, loans and technical assistance. The goal is for these businesses to help support refugee families.

The MED program has helped more than 30 entrepreneurs access nearly $50,000 in start-up capital and credit-building loans. These businesses have appeared at 21 farmers’ markets, flea markets, craft fairs, and arts and culture festivals in 2021 alone. Three local participants have opened physical stores, and a fourth is on the way. A total of 89 participants registered to start a business.

Chwalek explained that the MED program is flexible and entrepreneurs can request more help when they need it. “[The program] varies a lot depending on the type of business someone is starting,” he said.

Entrepreneurs can get help tailoring their product for the Cleveland audience, making business plans, registering the business and getting any documents it may need, like permits, and applying for funding with grants and loans.

Muvunye wants to grow his small business enough to support his family, but he needs help reaching out to potential customers, especially through social media pages like Facebook.

Victor Harerimana, co-owner of Equity Language and Employment Services, is also a Congolese refugee. He used the MED program to launch his business. Harerimana found himself in Cleveland after spending 20 years in Uganda as a refugee and elementary school teacher. He has always been adept with languages ​​and chose to start an interpreting business after working as an interpreter for Catholic Charities.

Harerimana said the program helped him register the business and apply for a $1,200 loan.

“[The program] took us where we [were] meant to be,” he said. “We are able to operate in Ohio and New York and earn money to help us continue.”

Like Muvunye, Harerimana’s business does not earn enough to support his family. Now he said his business is able to grow. He hopes the MED program will help him build the customer relationships and connections he feels he still lacks to truly succeed.

Hislope hopes to earn entrepreneurs’ trust and help them realize their small business aspirations by “being the connecting piece of their puzzle that catalyzes their business from concept to profitable reality,” she said.

About 1,500 refugees resettled in Ohio in 2019, with most of them making their homes in Cuyahoga, Franklin, Hamilton, Montgomery and Summit counties, according to the Ohio Department of Employment and Family Services. While these displaced people came from more than 20 countries, most came from the Democratic Republic of Congo, Ukraine, Eritrea and Afghanistan.

In fact, Ohio ranked sixth in the number of refugees resettled in 2019 – and in previous years it ranked in the top five – just behind more populous states like Texas, California and New York. .

Joe Cimperman, president of Global Cleveland, which connects immigrants and refugees “to economic, social and educational opportunities in Cleveland and Cuyahoga County,” is the son of an immigrant who is dedicated to Cleveland’s diversity. “The problem is that we, as a community, have to realize that the only reason we’re fighting in Columbus for one lost congressional seat — instead of two — is because of immigrants,” he said. . “We no longer have the children we once had.”

Cleveland, like many cities in the Midwest, has seen a decline in downtown population over the years. According to the US Census, Cleveland’s population has decreased by 6% over the past 10 years. Cimperman spent his childhood in the St. Clair-Upper neighborhood on the east side of town. “The only way to continue to be a thriving place is to welcome international newcomers,” he said. “Yet it is something that we too often take for granted in our region. This is something that our organization tries to remind people of. Too often it is viewed as charity or a crisis. The truth is that our economy depends on new bodies, new blood, new innovations.

Why is Ohio so popular? While the refugees are sponsored by nonprofits and usually can’t choose where they end up, Chwalek has some ideas. He said Cleveland is a place full of potential with empty storefronts that could be rented out and developed.

Refugees who find jobs and become entrepreneurs can stimulate the economy. “One thing that [Ohio Governor Mike Dewine] has done incredibly is its support for refugees,” Chwalek said. “Cleveland has been a very welcoming place.

Chwalek and Cimperman think it’s essential to keep programs like MED going because they not only help refugees, but potentially help strengthen the local economy. Proponents of similar programs in other cities feel the same way.

In Buffalo, New York, a program similar to the MED program was implemented in 2018 through Journey’s End. It was called the Buffalo Refugee Child Care Microenterprise Project. Over three years, a $562,500 grant has helped refugee entrepreneurs from Burma, Iraq, Rwanda, the Democratic Republic of Congo, Somalia and Nepal start their own childcare businesses.

In an interview with Buffalo News, Carolynn Welch, executive director of the Westminster Economic Development Initiative, said the immigrant and refugee population has revitalized some neighborhoods like Grant Street. “The community has become a safer community,” she said. “We have seen the economy grow instead of continuing to stagnate.”

Chwalek said programs like MED have already helped revitalize Cleveland. “Pretty much every corner of the city has a refugee or immigrant-owned business,” he said. “From the east side with Nepalese and Indian roots to Syrians moving to Little Arabia to the Ethiopian and Eritrean Habesha restaurant in the far west of Kamm’s, it’s been a hit.”

US Together seeks volunteers and business mentors in any industry to support the growth of the microenterprise development program. Please follow this link to learn more about volunteer opportunities with US Together.

Aja Hannah is a writer, traveler and mother. She is the author of two books and hundreds of articles on diversity, equity and sustainable travel. As an active member of the Society of Travel Writers, she conducts press trips that prioritize trips that have an ecotourism angle or are human-centric. She believes in the Oxford comma, cheap flights and a daily dose of chocolate.

This story is part of Northeast Ohio Solutions Journalism Collaborationof the Making Ends Join project. NEOSoJo is made up of more than 18 Northeast Ohio news outlets, including The Land.