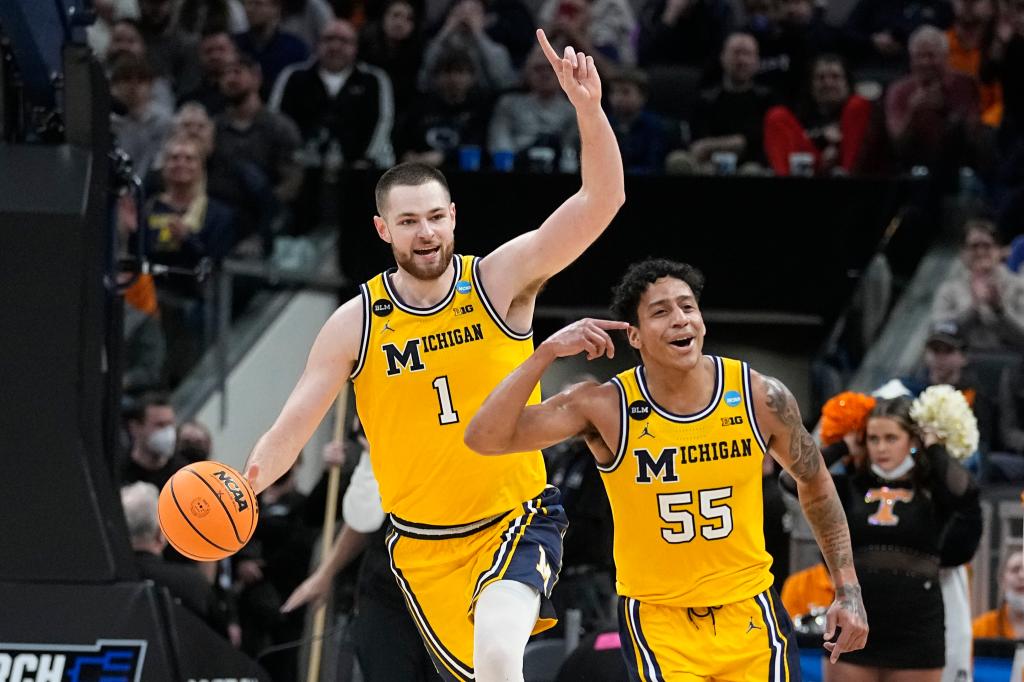 INDIANAPOLIS — Eli Brooks returned for one final college season with the goal of helping Michigan reach the Final Four.

Defying expectations, the Wolverines are halfway there.

Brooks scored seven of his 23 points in the final 3½ minutes and the 11th-seeded Wolverines booked the most surprising of their five straight Sweet 16 appearances, beating third-seeded Tennessee 78-68 on Saturday at the second round of the NCAA Tournament.

“I’m just trying to live in the moment and cherish the time we’re having with the people in my life right now in Michigan and enjoying the process of reliving this tournament and having this chance to get our last goal. “said Brooks, a fifth-year senior.

Michigan’s five consecutive trips to the regional semifinals is the second-longest streak in the nation behind Gonzaga’s. The Bulldogs beat Memphis on Sunday night to make their seventh straight Sweet 16.

At the end of the season, it was unclear if the Wolverines would make it into the tournament, let alone if they would have a chance of making a deep run.

Hardly a conventional Cinderella given its resources and pedigree, Michigan (19-14) has the worst record of any team remaining on the field and has done the bare minimum to secure a berth at wide. The Wolverines hadn’t won back-to-back games since mid-February.

Still, coach Juwan Howard’s team has plenty of talent and raised their game against Southeastern Conference champion Vols, who led by six points with 8½ minutes to go before going cold. Howard himself had to learn a few lessons about composure when he was suspended for five games late in the season for hitting a Wisconsin assistant during a postgame handshake line.

Next up for the Wolverines will be either second-seeded Villanova or longtime rival Ohio State, the No. 7 seed, on Thursday in the South Region semifinals in San Antonio, Texas.

“Getting to the Sweet 16 is, literally, sweet because no one believed in us,” said sophomore big man Hunter Dickinson, who led Michigan with 27 points and 11 rebounds. “Everyone thought we shouldn’t be in the tournament and now people who hated us are going home and getting ready to watch us next week.”

Kennedy Chandler had 19 points and Josiah-Jordan James had 13 for Tennessee (27-8), which ended a seven-game winning streak. Two days after breaking a school tournament record 60 percent from the field, the Vols shot 41.8 percent and again failed in the playoffs. Tennessee lost to Oregon State in the first round last year, also at Gainbridge Fieldhouse.

This year, the arena was filled to the rafters with an orange hue, and Vols fans repeatedly repeated the lyrics to “Rocky Top” during downtime – a stark contrast to 2021 when attendance was limited to approximately 25% of capacity due to COVID-19 restrictions. The energy made the difference.

“We had higher expectations, but credit goes to Michigan – they played better basketball for 40 minutes,” James said. “It definitely hurts. It’s not a good feeling to be here at the moment on the losing side.

Michigan controlled most of the first half until the Vols used a late 13-4 run to take a 37-32 halftime lead. Tennessee played up front for most of the second half until Michigan went 14-5.

Wolverines tied the game twice on tips from Terrance Williams II. And then Brooks rocked the game.

His three-point play with 3:21 left made it 65-62. Chandler’s jumper cut the deficit to 66-64, but James missed a 3-pointer and Brooks responded with his old-school hook before Michigan shut him down at the free-throw line.