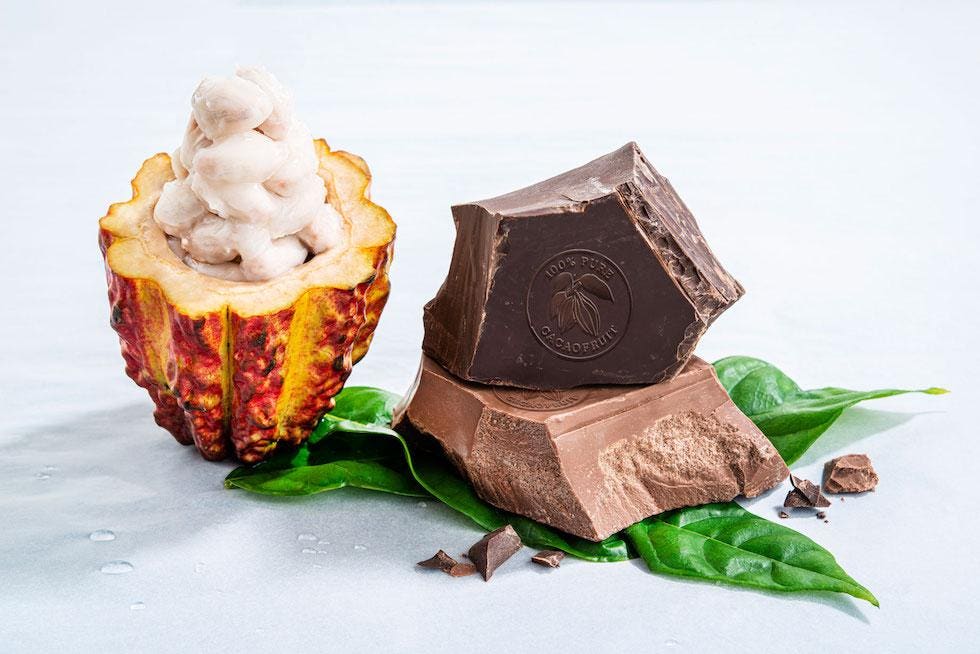 Barry Callebaut launched the world’s first chocolate made from the entirety of the cocoa fruit in San Francisco, including its nutrient-rich rind and fruity pulp juice. The Swiss chocolate maker said its latest line of confectionery products, named “Cacaofruit Experience”, marks the creation of a next-generation food and drink category.

For those unfamiliar with the initial chocolate making process, most chocolate products on the market are made with cocoa beans – basically the bitter kernels after a thin layer of juicy pulp enveloping them has evaporated. by a sun-drying process.

The pulp itself, however, tastes like a cross between peach and mangosteen, and it has been used by some chocolate makers as a natural sweetener. I have learned from my past experience of visiting a cocoa farm in the Amazon that cocoa bean pulp can hardly be marketed for making drinks due to its small quantity.

So technically 70% of the cocoa fruit is thrown away as waste for making chocolate, according to Barry Callebaut. He noted: “Cacaofruit Experience literally unleashes all the power of the cocoa fruit… [which] results in a range of high quality ingredients that can be used in applications such as juices, smoothies, frozen desserts, bakery and pastry products and snacks up to chocolate.

Using the whole cocoa fruit is also expected to help increase the volume of chocolate production, according to Peter Boone, CEO and Chairman of Barry Callebaut Americas. He told me, “As we produce more chocolate, we hope to continue expanding our market share,” adding that while the price of Cacaofruit Experience has not yet been determined, the product is being produced through a new supply chain.

From May 2020, this new type of chocolate will be available in two variants, which will first be adopted by 30 chocolatiers and pastry chefs around the world: the punchy “Wholefruit Bold” and the soft and delicious “Wholefruit Velvety”.

Barry Callebaut believes the product has a “winning value proposition” because it caters well to millennials and centennials who want tasty, nutritious food that is also good for the planet.

“Caccaofruit Experience meets this need,” he said in a prepared statement. “They taste fresh and fruity and are rich in nutrients such as fiber, protein and magnesium. At the same time, they are good for the planet and its inhabitants because all the cocoa fruit is used. ”

Antoine de Saint-Affrique, CEO of Barry Callebaut, stressed that innovation is one of the pillars of the company’s growth strategy. “Our unparalleled knowledge has enabled us to innovate, unleashing the full power of the cocoa fruits that the Mayans cherished as ‘food of the gods’,” he said.

In 2017, Barry Callebaut also unveiled Ruby in Shanghai, a naturally pink, berry-tasting product that was invented by extracting certain compounds from Ruby beans, which are found in Ecuador and Brazil.

Nestlé became the first major manufacturer to launch a line of Ruby KitKat in markets such as Japan and South Korea.

While Barry Callebaut has claimed that it is the fourth type of chocolate besides white, milk and dark, the product has yet to be cleared for labeling as chocolate in the United States due to regulatory barriers.

The company’s innovation team explained to me last year that the FDA has a regulatory code that defines food categories based on the ingredients that can or must be there, the maximum or minimum amount of certain ingredients and the percentage of ingredient compositions – which make Ruby does not fall into any of these existing chocolate categories.

Although the chocolate company has submitted a temporary marketing permit through the FDA that would give it approval to market Ruby as chocolate, it is still awaiting a response, according to Boone.

He said, “The situation with Ruby in the United States is a bit unique… We have decided not to wait for the FDA to grant us temporary marketing authorization, [since] we have seen so much interest and demand for this product ”from other global markets where Ruby is used in food applications such as ice cream and baked goods.

A tour of Athens’ own Condor chocolate factory | Arts & Culture