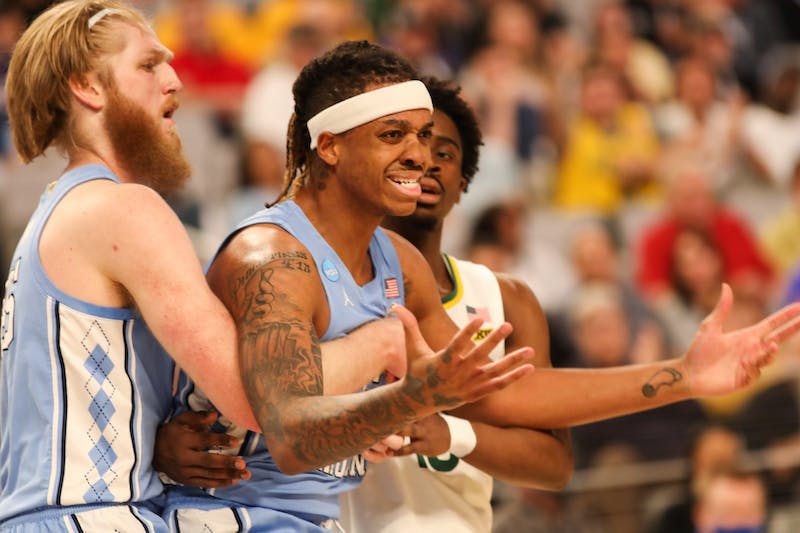 With just under 11 minutes on the clock, the No. 8 seed UNC had the defending NCAA champions and top seed Baylor on the bus and ready to head back to Waco.

The Tar Heels are up 25 points – their biggest lead yet in the game.

But a quick turn of events would put the Bears back on the hardwood and chasing them on the scoreboard. A series of technical fouls and ejections led to abrupt changes in UNC’s lineup and strategy.

But at the last minute, the North Carolina men’s basketball team booked their ticket to the Sweet 16 for the second time since 2019, beating Baylor, 93-86, in an emotion-filled game.

Less than a minute after graduate striker Brady Manek’s three made the lead 25, he was sent off with a flagrant foul.

Then, second-year goaltender Caleb Love was fouled. To top it off, junior forward Armando Bacot committed his fourth foul.

The Tar Heels lead had shrunk to just nine with five minutes left in the game.

With only sophomore guard RJ Davis and Bacot, the team’s top scorers, remaining in the game, the Tar Heels had their backs against the wall.

This was especially true for Bacot, whose size and paint presence is what UNC needed most. But, through the noise, he delivered with confidence and didn’t let adversity affect his impact on UNC’s upset victory.

Throughout the game, Bacot asserted his dominance in the key, posting a monstrous double-double of 15 points and 16 rebounds. Yet even before the Bears returned, he ran into some trouble.

Things got particularly turbulent between Bacot and Baylor’s Jeremy Sochan. They fould each other several times, including a second-half scrimmage for a stray ball that resulted in a common foul and a technical foul for Bacot’s second and third, respectively.

“You just had two teams fighting and scratching and punching and clawing with every pass, every rebound, every cut and every shot,” head coach Hubert Davis said.

But this scrapping came at a cost. After losing Love on his fifth foul and Bacot on his fourth, it was time to play it safe.

With a career-high 30 points against the Bears, RJ Davis showed he could fight for the Tar Heels all season long. With the way he plays, it might not have been the end of the world if Bacot had committed a foul.

RJ Davis credited Bacot’s play – along with that of transfer forward Justin McKoy and freshman winger Dontrez Styles – with his ability to “get easy baskets” that allowed the offense to score under pressure, which the Tar Heels were reluctant to fold.

“I think Justin, Armando, Trez did a good job of creating space to open up,” he said.

But one foul away from a permanent spot on the bench, Bacot’s play reflected a determination not to leave his teammates on the pitch with the season on the line.

“I just had to be smart and not pick up stupid offensive fouls by setting screens or sealing or doing anything like that,” Bacot said. “Also on the defensive, I just had to try to keep my body away from their guards at the end.”

He followed that plan perfectly in the final minutes of regulation time and overtime, providing crucial blocks and rebounds to stop Baylor’s offense and give UNC more opportunities to secure victory.

But trying to stay on the safe side, Bacot was fouled a few times, including going over the line and dropping five free throws between the final two minutes of regulation and during extra time.

This season, he hasn’t always been the best option for the Tar Heels.

And yet, it was Bacot’s one-and-one with just under two minutes left in regulation time that dampened Baylor’s momentum as they climbed within three points. He was essential in breaking down the Baylor press defense that was causing so much trouble for UNC.

It was his acting during those critical moments that mattered most: without him, they might not be dancing in Philadelphia this Friday.

“There was a lot of pressure in those moments,” Bacot said. “But I mean, it was just the next game mentality, and we had to really dig in and keep pushing and keep a cool head.”