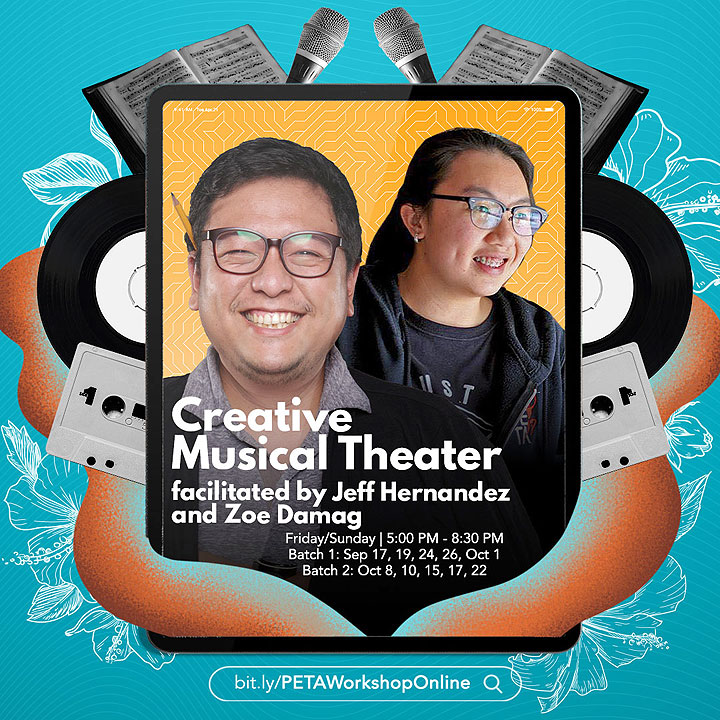 REPERTORY Philippines (Rep) to Bring Holiday Joy to Every Home with Musical The Great Christmas Cookie Cake! which marks many firsts. It is the first performance theater for young audiences (RTYA) offered for over a year. It is also the very first Filipino production to be released on the Broadway On Demand streaming platform. The musical is also the country’s first to be filmed on purpose for an international online streaming service. On view from November 12 to December 12, The Great Christmas Cookie Bake-off! combines the centuries-old tradition of Christmas cookies with the ever-popular phenomenon of reality baking contests. It features eight young cookie chefs from across the country competing for the top prize at the Cookie Coliseum. As the leaders are eliminated one by one by three famous judges, feelings of intense rivalry give way to the virtues of charity, family and forgiveness. The show is directed by Joy Virata, Creative Director of RTYA. The cast of the musical consists of Becca Coates, Tim Pavino, Jep Go, Jillian Itaas, Luigi Quesada, Rachel Coates, Justine Narciso, Steven Hotchkiss, Carla Guevara Laforteza, Jamie Wilson, Arnel Carrion and Hans Eckstein. Treb Monteras directs the video production. Ticket prices are P700 (regular) and P1,000 (family / household). Each ticket provides access to the musical 24 hours a day, accessible via a computer or mobile device via a web browser or via a tablet or smartphone via the Broadway On Demand app on the App Store and Google Play. Broadway On Demand is also available on AppleTV and Roku. For updates, visit www.repertoryphilippines.ph, like and follow Repertory Philippines on Facebook and Instagram. Educators and school representatives who are interested in the show can send an email to [email protected]

FUNDACION Sansó, in partnership with Museo Pambata, launched a fundraising event to benefit the temporarily closed museum in Manila – sold two Sansó limited edition giclées titled Golden Bloom and Wandering Dream. Due to limitations imposed by the ongoing 2019 coronavirus disease (COVID-19) pandemic, the Museo Pambata, a prime destination for school trips and tours, has become unable to accommodate visitors, causing it to become unable to accommodate visitors. lost a large part of his income. The fundraiser, Flowers for the Children, began in November 2020. In June of this year, Fundacion Sansó officially donated the proceeds to Museo Pambata via the live broadcast on its Facebook page.

SALCEDO Auctions’ annual The Well-Appointed Life auction showcases’ important Filipino art ‘and a’ collection of connoisseurs’. Under the theme “The Worlds We Create”, the sale will take place simultaneously live and online on September 18 at 2:00 pm in the NEX Tower auction room. The auctions are works by some of the country’s former masters and master craftsmen, as well as contemporary artists and emerging international designers. One of the highlights of the auction is a 1900 seascape recently discovered in oil by Félix Resurrección Hidalgo titled Marina. There is also a 1975 oil painting by national artist HR Ocampo titled Excursion to Pinaglabanan – a tribute to Andres Bonifacio, Emilio Jacinto and the successful capture by the Katipunan militia of a Spanish military base. Also in the auction is a 1966 oil on wood by national artist Jose Joya titled Blue Harbor. The online catalog as well as the auction record and location of the online auction are available at salcedoauctions.com. For any inquiries, email [email protected], call 8823-0956 or text 0917-107-5581.

SILVERLENS will be attending Art Basel with a show titled “Endless Blues” featuring works by the late Filipino-American artist Pacita Abad. There will be a VIP screening from September 21 to 23, followed by a public screening from September 24 to 26. The presentation will focus on his Endless Blues series from the early 2000s. Made towards the end of the artist’s life, these works bring together Abad’s fascination with batik fabric, his love for blues music, and incorporate the color, energy and vibrancy of a life on the road in various forms of abstraction. Three contemporary artists will be presented alongside the deceased artist through the Art Basel OVR, all linked to Abad: Pio Abad, Patricia Perez Eustaquio and Nicole Coson. London-based Pio Abad, who is the nephew of Pacita Abad, will be holding a tour of the Endless Blues exhibit on September 23, at 11 a.m. in Basel and 5 p.m. in Manila and Hong Kong. He will talk about his aunt’s life and share his thoughts on his abstract works presented in the Art Basel exhibition. For more details, visit www.silverlensgalleries.com, or call 8816-0044, or email [email protected]

AN EXHIBITION of works by Wilfredo Alicdan titled “Geometric Mode” is running until September 15 at the Artologist Gallery in Shangri-La Plaza.

HEALTH workers used the arts to escape the stress of the pandemic, as the historic and cultural center of the city of Tagum held its first Art in the park, aiming to advocate for the arts to help deal with the problems of mental health in these difficult times. An ancillary event to the Centre’s National Heroes Day celebration, Art in the Park brought together five nurses who had previously enlisted in the Centre’s Art as a Tool for Therapy conference by its resident artist Victor Augustus Dumaguing. Held at Tagumpay Nature Park on August 27, the full-day event included a brief talk and demonstration by Mr. Dumaguing on the many ways to create art, especially self-portraits. Healthcare workers were asked to paint their projection of themselves onto the canvas, resulting in a colorful blend of hues in one large painting. Prior to the event, all of the attendees had little or no painting experience, and their collective production surprised them. Their production will be one of the works included in the Centre’s participation in the Mindanao Art Fair in October, the annual gathering of the island’s best artists.

The PHL-Korea festival is online

The PHILIPPINES-KOREA Cultural Exchange Festival for 2021 will be an online event. A highlight of the festival is the We Stand Together online concert, which will be held on September 25 at 3 p.m. Organized by the Korean Embassy and the Korean Cultural Center in the Philippines in collaboration with the United Korean Community Association (UKCA) and the National Commission for Culture and the Arts (NCCA), the concert will feature performances by artists Filipino and Korean and can be streamed for free through the Korean Cultural Center (KCC) on the Philippines Facebook and YouTube pages. The concert will also be broadcast on the UKCA and NCCA Facebook pages. The festival’s online talent competition is divided into Voice and Dance categories. Filipino participants (solo or group) can enter the voice competition by performing a Korean song, while Korean participants (solo and group) can join the voice category by singing a Filipino song. For the dance category, Filipino and Korean participants (solo or in a group) can perform any Korean pop, traditional or cultural song. The submission of nominations is until September 11, after which a voting period will begin from September 13 to 17. The top winner of the online talent competition will take home P 50,000, while the winners in the Vocal and Dance categories will receive P30,000 each. The winners will be announced during the online concert. There will also be a special screening of modern and contemporary art every Sunday in September via KCC’s social media. Follow the KCC on Facebook (https://www.facebook.com/KoreanCulturalCenterPH/) and @kccphil on Instagram and Twitter for more information on Embassy and KCC events and activities.