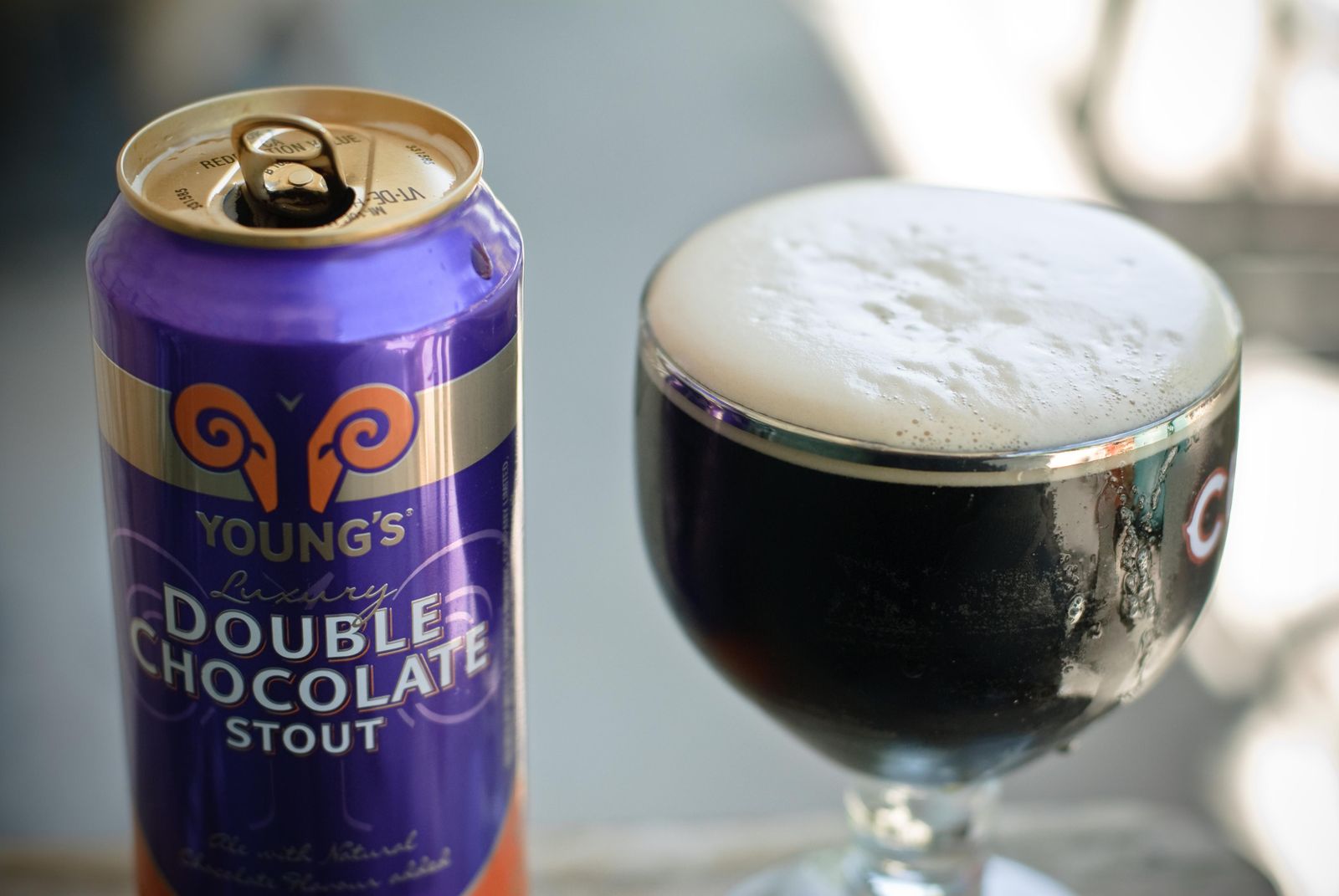 Peanut Butter. Strawberries. Milk. Hazelnut. Red peppers. Coconut. Bacon. Marshmallows. Dried crickets. The world, it seems, was made to be eaten with chocolate.

Additionally, beer is increasingly being made with chocolate, especially for Valentine’s Day releases. The funny thing is, brewers don’t really need chocolate to make chocolate-flavored beer, because the things they can do with malt and hops are amazing. With these basic beer ingredients, brewers can create just about any flavor on the spectrum. Many imperial stouts and porters have a remarkable chocolate taste even without added cocoa. Think Brooklyn Brewery’s Black Chocolate Stout. The 10% alcohol by volume beer is intensely hazy, but there’s no chocolate in the recipe. The beer bears witness to the art and alchemy of brewing.

On the other hand, we have Sexual Chocolate, made every January by Foothills Brewing Company in Winston-Salem, North Carolina. Brewer Jamie Bartholomaus, who devised the recipe in college as a homebrewer, infuses 300 pounds of raw organic Peruvian chocolate chips into a strong imperial stout, but the beer only strips away the weakest cocoa essence. “Some people hit us, saying we cheated them and didn’t use chocolate,” Bartholomaus says. For some reason, the beer has developed a strong cult following, and on release day in February, a small rush of fanatics swarm the brewery to get their sex chocolate. The bottled supply usually sells out in about three hours.

Brewers use several ways to add chocolate to their beer. Some use chocolate syrup, some powder, some bars, and some use pieces of dried cocoa fruit that look like coffee beans. So which chocolate beer is right for you? It depends on what you like. Some chocolate beers have a very subtle cocoa taste, as if unsweetened baker’s chocolate was carefully sprinkled into the kettle. Others are more like a mashed chocolate brownie. In the spirit of Valentine’s Day, when chocolate sales are on the rise, we’re reviewing eight chocolate beers.

This beer smells like brownie and tastes like liquid chocolate. It goes down thick, smooth and milky, and although it’s a rich, viscous mouthfeel, it’s delicious and, at a light 5% ABV, doesn’t exhaust the palate. This is one of the best chocolate beers in the category, from a historic brewery that knows its stuff.

This 5.3% ABV stout showcases cocoa fruit with subtlety and restraint. The beer’s thick foamy head dissipates in two minutes, but the ebony infusion remains smooth and silky. The taste is bitter, charred, and toasty, and the quiet chocolate flavor is hard to grasp unless you watch it.

Made by the nation’s largest craft brewery, the Sam Adams Chocolate Bock showcases cocoa in a different medium than conventional stout. The 5% ABV beer is a bock, dark tan in color, with some of the typical “dark” beer flavors, such as fig, bread, and molasses. The chocolate flavor is muted but blends with the other elements, rich and milky.

Another low gravity stout, Young’s Double Chocolate Stout has a strong fudge aroma. On the tongue, however, the beer feels light and a bit runny, more like water than milk.

A first sip produces toast, coffee, toasted nuts. Then, after this first influx of flavors that breaks and passes like a wave, the chocolate advances, bitter but rich. At 6.9% ABV and quite the opposite of sweeter styles, like Samuel Smith’s, Speakeasy’s offering incorporates more chocolate as an adjunct to the larger beer high, not as a culmination in itself.

You might have tasted sour beers like lemonade, whiskey-aged stouts, and smoky-tasting porters, and you think you’ve been to all four corners of the craft beer kingdom, and then you come across this oddity. This is an India Pale Ale, the preferred style for its crisp, pungent hop aromas and pungent alpha acids on the palate. But this one was dipped in chocolate. The beer is named after a nautical theme – “Castaway” – and a motto line on the bottle reads: “Sink the status quo”. This unusual IPA sinks it. The chocolate gives the beer a curious tootsie roll flavor, and the end result looks more like a barleywine.

Food tastes bad without salt, the greatest flavor enhancer. Although the beer does very well without salt, the brewers at New Belgium Brewing Company decided to give their recently released chocolate stout a boost with the addition of calcium chloride and sodium chloride. Already a hearty beer at 9 percent ABV, this latest rendition of New Belgium’s Lips of Faith gains a savory body and a textured mouthfeel that it almost feels like you could chew.

Brewed with cocoa powder and nibs, honey, ancho chili peppers and annatto seeds, Theobroma, the genus of cocoa tree, is Dogfish Head’s tip of the hat to Aztec culture and their ancient use of chocolate as a drink. The beer is tawny red in color and if served in the sun it really shines in the glass. Chocolate chips aren’t the only unusual ingredient in this beer. Annatto seeds, honey and ancho chiles were also used in the recipe, and the latter two are obvious to even the dullest of palates, while the chocolate whispers quietly.

A new spirit of tequila type distilled from cocoa fruits