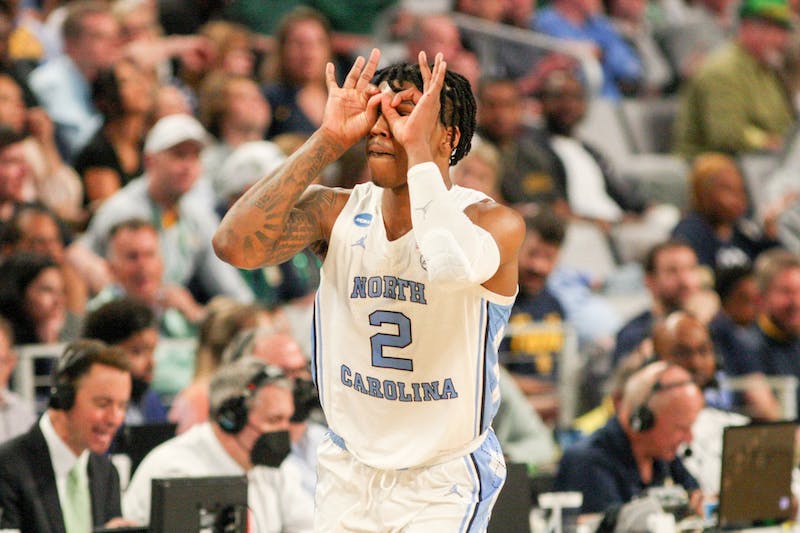 The No. 8-seeded North Carolina men’s basketball team smothered the No. 9-seeded Marquette 95-63 in the Tar Heels’ NCAA Tournament opener.

Despite an early basket from junior forward Armando Bacot, the Tar Heels were slow to get going offensively to start the game – struggling to find baskets in the paint and deep in the first eight minutes.

Marquette stayed close behind, finding open looks early on, but UNC took full control after building a 10-point lead with an 8-0 run midway through the first half.

Graduate forward Brady Manek kicked off the run after being fouled on a 3-pointer and making all free throws.

And from that moment, the Tar Heels continued.

They found rhythm at three, especially second-year guard Caleb Love, who himself hit four triples. Manek, sophomore guard RJ Davis and sophomore guard Puff Johnson also all contributed from depth – pushing the lead to 20 with just under six minutes left in the first half.

Towards the end of the half, things got complicated – especially between Love and his opponent, Golden Eagles goalkeeper Darryl Morsell. The two guards had three altercations in the final five minutes, including Morsell’s technical foul committed as the guards fought for a loose ball, Marquette’s third technical foul of the game.

Love responded with two more threes, including the dagger with less than a minute left in the half that earned him over 20 points and pushed the lead to 26.

The second half was equally demoralizing, as a quick dunk from Manek put the lead at 30.

The Tar Heels maintained their relentless offensive attack as Manek continued to connect from three and get easy looks in the paint, while Marquette struggled to get into any offensive groove.

With the lead constantly hovering around 30, Marquette went into desperation mode — pressing UNC all over the pitch — but that wasn’t enough to stop the bleeding and reduce the deficit.

UNC picked up the easy win – securing a second-round appearance against defending champion Baylor Bears in the No. 1 seed.

Love played his best game of the season – tying his career high for three in the first half and hitting his season high of 23 points. His offensive talent was particularly prominent in the first half, where he recorded a season-high 21 points in one half.

Manek and Bacot also hit home for UNC. Manek also broke his season high with 28 points and 11 rebounds, and he also made his defensive presence known with two blocks. His second-half performance was crucial for the Tar Heels to hold onto the big lead and turn the game into a complete rout.

Bacot also recorded yet another double-double with 17 points and 10 rebounds. A rebound from the big man in the first half was his 417th of the season, surpassing Brice Johnson’s 416 boards in the 2015-16 season for the most rebounds by a Tar Heel in a season.

This game was decided in the first half as UNC used the three-point line to put Marquette away early. The Tar Heels shot 45.5% from three in the first half, and they also dominated in the paint – grabbing 11 offensive rebounds for 21 second-chance points to their opponent’s 2 points.

The Tar Heels were also helped by Marquette’s shooting problems and Manek and Bacot’s tough interior defense that kept the Golden Eagles to just 25 points in the half.

The win moves the Tar Heels forward in the tournament, but it also showed a team that looks focused and prepared for what they want to accomplish this postseason. It’s very promising that UNC is playing its best basketball when it matters most. With a performance like this, the Tar Heels proved that their ranking won’t define their game.

The Tar Heels will face No. 1 seed Baylor in the second round on Saturday, March 19 in Fort Worth, Texas.